Friday was a beautiful day across California. Perfect temperatures, flowers in bloom, clear skies and, over the state capitol, a small plane flew a  banner that depicted California Gov. Gavin Newsom as Hilter and a message that read “END HIS TYRANNY!”

Yours truly was on the ground at the State Capitol Friday afternoon to join a motorcade demonstration to reopen the state. It was a dozen blocks of gridlock and a symphony of honking horns. What appeared to be a sea of mostly middle-class, middle-aged Americans — mostly with children and families — were smiling at one another and waving American flags. 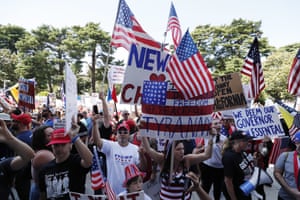 All in all, from my vantage point, it was more like a 4th of July block party in middle-income, middle-America community rather than a hardcore protest.

In recent weeks, fascist social media tyrants pledged to immediately remove any postings about protests. So it was merely by chance on Friday morning that I even heard about the demonstration. The tip came from someone who works for a federal agency downtown. People in his division had received an email warning staff.

But there was nothing to be weary of at this event. There were no Antifa or Bam! psychos inciting violence, or self-promoting cutout figures like self-described “dangerous faggot” Milo Yiannopoulos. There were no signs of people being bused in to demonstrate. It wasn’t a Trump rally either, though there were a some pro-Trump slogans seen, predictably. 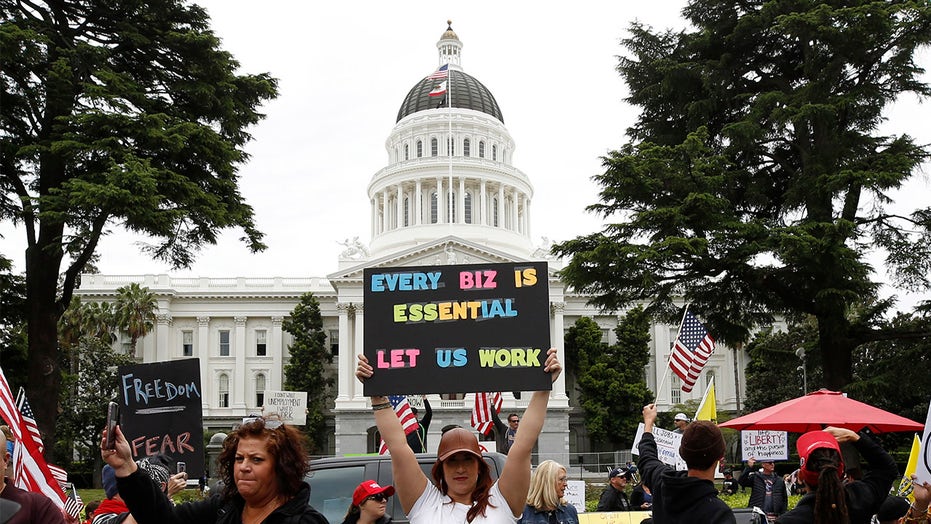 I was on the perimeter of the park, not on the capitol steps. From what I saw, the dominating messages were anti-Newsom and pro rights, such as “impeach Newsom,” “right to work” and “reopen California.” There were also a few groups of demonstrating against forced vaccinations.

The police I saw were just hanging around on street corners observing or directing traffic. They were friendly and smiling, and people were cordial to them. I saw no confrontations, though a local news channel reports that 32 people were arrested later in the day.

Taking into account the motorcade and park protesters as well as the capitol building, I’d say there were easily thousands demonstrating in downtown Sacramento Friday. But that’s not what most of northern California’s Lugenpresse would have you believe.

Newsom’s hometown rag and mouthpiece, the San Francisco Chronicle, for example, claimed there were only hundreds of protesters at the capitol and painted it as a pro-Trump rally. There was hardly a mention of Gavin.

This drone video shows a good view right in front of the capitol building, but it doesn’t show anything outside of that one area, like the motorcades and sidewalk demonstrations that went on for blocks and blocks. 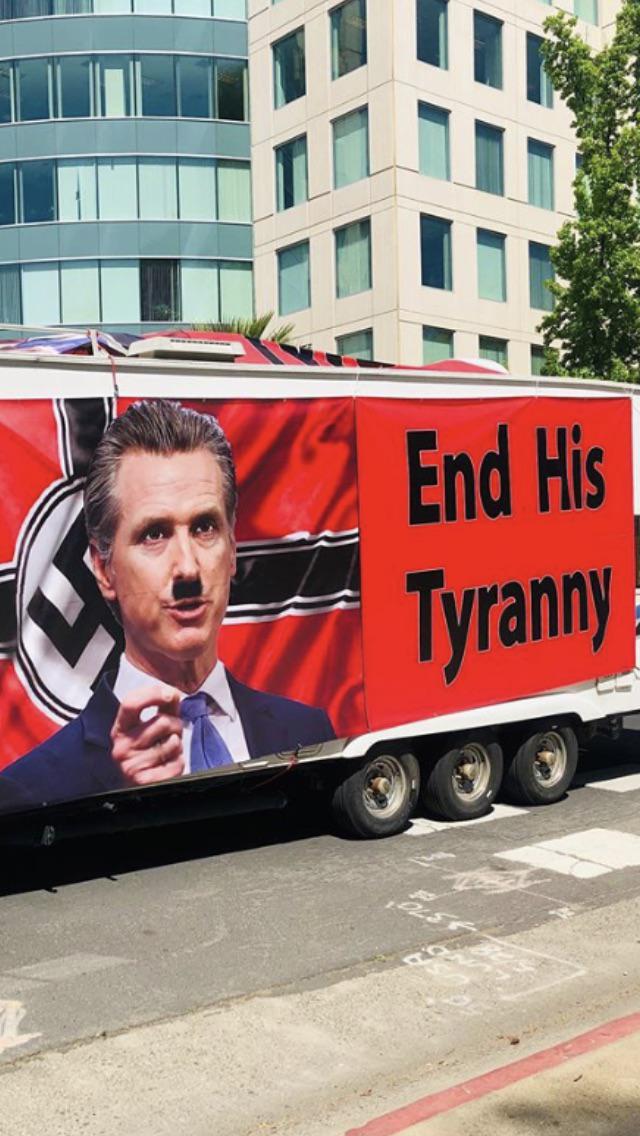 It was the Nazi Newsom posters that surprised me most. And, after listening for year to leftist bullies and libtards label pro-nationalism/anti-globalism white people as Nazis and fascists, I have to say I found the flip of the script amusing and ironic.

Newsom last week announced that that businesses across California shall remained closed until further notice, while teasing his slow-roll plan to reopen the state sometime in the future. Basically, he said people need to continue to shelter in place and work from home with a few exceptions.

Californians can now go to the dentist for their teeth whitening treatments, have non-essential surgeries like Botox injections and play a round at their country club. We can also visit state parks — except in Orange County, the Left Coast’s last Republican stronghold. Some retail might open in a couple weeks or so, but don’t plan on making any restaurant reservations. Health clubs and hair cuts are looking at July.

There are some parts of the state where no visitors are allowed period. There’s a ban on visitors in Lake Tahoe, for example. Some Californians have a second home there. If they’re caught visiting it — which people have to do seasonally for maintenance — they can be cited a $1,000 fine. The city of South Lake Tahoe is encouraging primary residents to call the cops on absentee neighbors who break the rule, and they are.

Keep in mind that California has had just a little over 50,000 COVID diagnoses out of a population of nearly 40 million. That’s 0.13 percent of the state. But California’s testing rate per 100,000 persons is quite low compared to other states. This means that at any time, Newsom can choose to goose the COVID figures by simply issuing more tests. He can also broaden the directives for labeling deaths as COVID-related moralities.

Meanwhile, while we’re all in lockdown, flights from Asia — including Wuhan, China — arrive in California every day, and have been since early March. Hawaiian Airlines, for example, has a daily flight from Wuhan to LAX. But that’s not all.

Flight trackers, such as Flightware.com, shows massive air travel in real time across the northern hemisphere while life on the ground has been brought to a standstill. Lockdowns to stop the spread? Travel bans? What a joke. This really puts the scam in scamdemic.

The protest at the capitol wasn’t the only one on Friday. Cities across the state turned out to show support for reopening California. A couple of people showed up in Huntington Beach, too. #EndtheLockdown

A Few More Words About Newsom

By the way, in case you didn’t know, Gavin Newsom, 52, is part of a California’s political dynasty that now controls California’s Democrat machine politics. I’m not going to delve into it deeply in this post. You can read more about that subject here, if you’re interested. But in brief, he’s the nephew of California congresswoman from San Francisco and Speaker of the House Nancy Pelosi. Newsom was the mayor of San Francisco. Former California governor and family friend Jerry Brown then named Newsom his lieutenant. And now Newsom is governor of the “nation state,” as he like to call it. But suspect he has his eyes on the White House.

Perhaps Oval Office aspirations are why he had a day-long series of online conversation with former president Bill Clinton hosted by the Clinton Global Initiative University on April 18. What the hell is the Clinton Globalist University anyway? A Manchurian candidate training camp for future California leaders? Jesus.

The “conversations” also included dyNasty democrat Andrew Cuomo and other limousine liberals. Topics ranged from the Clinton Foundation’s role in finding vaccines and COVID racism. I kid you not.

It appears that Newsom’s big concern is the welfare of illegal immigrants to his sanctuary nation state.

Newsom announced a state bailout package for these illegal residents back on April 8.

The total is $125 million dispersed as $500 per illegal migrant, and up to $1,000 per illegal migrant household. However, there are at least 2.2 million illegal residents in California, CBS News reported. This is in addition to the free health care program he put in place for illegal immigrants prior to the scamdemic. To pay for the program, he implemented the same tax penalty program that the federal government used to have for for citizens who don’t have health insurance.

And just when you thought you couldn’t roll your eyes any further back into your head, Newsom in mid April announced he created  a committee whose sole job is to develop a strategy for California to recover from the scamdemic recession he planned to cause for the state.

And get this: It’s headed up by hedge fund billionaire and climate radical Tom Steyer, and it includes Bob Iger from the Walt Disney Company, CBS News reports:

Steyer said the committee will use California’s ideals of diversity, inclusion, and innovation as their core values. The governor also stressed this will not end up with a report in six months, but there will be real-time and meaningful updates that will lead to reforms and changes to get California on the road to recovery.

What does this mean? Only businesses that the panel deems diverse and inclusive will be allowed to reopen in Newsom’s nation state? Is the idea to break the back of small businesses across the state to get them to comply with draconian “reforms and changes” that fit these limousine neoliberals’ “core values”?

Trump’s Appointment of Pompeo as CIA Chief is Major Fail

12 Comments on Postcard from California: Protesters Against Lockdowns Flip the ‘Fascist Nazi’ Script