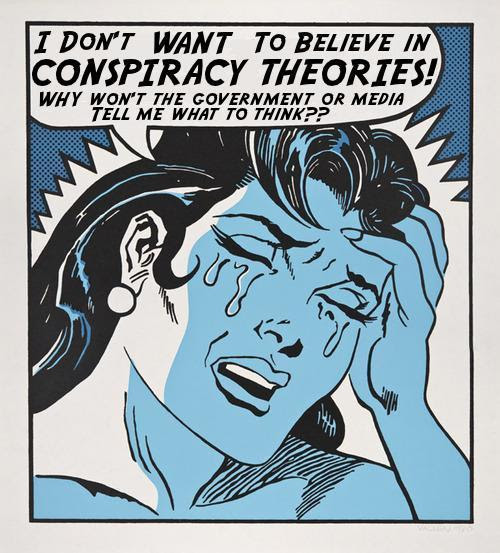 A “Survey on American Fears” from Chapman University’s Wilkinson College of Arts, Humanities and Social Sciences found a large percentages of folks believe conspiracy theories. This is especially true of the Big Two. This shows the percentages of those who agreed or strongly agreed to the question of government cover-ups and concealment of important information. A majority thought so on 9/11, and a near majority on JFK.

I have always felt 9/11 was low-hanging fruit. Even a cursory examination shows enormous holes in the conventional narrative. Of all the topics I have conversations about with normal people, 9/11 is the one they respond well too. This is even more so abroad. Since by and large I am speaking now to the choir, here is a simple high-impact method to broach the 9/11 topic.

Two years ago, my son and I were visiting with an older Scottish couple in a Christmas market imbibment hut. Naturally, when Europeans meet Americans, there is little hesitation for them to share negative views about Trump. Since we have no skin in that game, it’s relatively unimportant partisan bantering. The conversation can then be steered by saying something to the effect of, “Yes, yes, you are right, but there is much more to it than just Trump.”

My son and I both have the advantage of being smart, engaging people; and once the Trump WWE distraction is out of the way, foreigners like that about us — even if we challenge them. And if they slink away, so what. Who cares? So at some point, you just flat out ask: “What do you think about 9/11?” I find the Chapman poll is accurate. There is suspicion. But most people haven’t gone into the rabbit hole.

Thank god for public wifi and iPads. You don’t have time for a major discourse and an argument, but you can rock their world. I showed the Scots one key video. This has WTC 7 coming down eight hours after the Twin Towers, showing clear signs of internal demolition – AND it has the infamous Larry Silverstein “pull it” comment. The video has 20 million views for a good reason. If you need a third, go to video 2 below, the infamous BBC pre-announcement of WTC7 coming down 26 minutes before it happened. The Scotish woman we met in particular was in OMG mode, and the man was at attention.

They asked who did this? Unless it is someone already convinced 9/11 was a false flag, I answer with a question: “Do you think 19 Muslims with box cutters could overcome four airline crews, and then fly unimpeded and with precision, three aircraft into buildings, including the heavily defended Pentagon?” If you jump straight into Christopher Bollyn, etc., the conversation is over, so don’t do that with “normies”.

I have a true reinforcement given that my cousin actually was a UAL pilot. I had asked him, back when I was still a pyjama person, if any crew would have given up the cockpit to a box cutter. He told me absolutely not. Yes, people are suckers for human interest stories, especially if true. Yes, I, too, have the cousin story.

There were other notable results in Chapman’s survey. In Winter Watch’s interpretative framework, Americans have fears properly placed. It found 74.5% have high fear levels of corrupt government officials, 48.4% fear U.S. involvement in another world war and 44.4% fear another economic/financial collapse. Of course, the devil is in the details, as “corrupt government officials” is a misdirection away from the real threat: corporatist Crime Syndicate/Cabal capture of government discussed in spades here.

Unfortunately, the majority of Americans are falling hook, line and sinker for the jihadists and “white supremacist” boogeymen staged deceptions. It looks almost hopeless on that front. The majority actually believe this boogeyman threat is real. We devote considerable effort to exposing this falsehood because so few others do, but perhaps the 9/11 front is the best arena to bust through the lies and deceit. It is the weak link in the Crime Syndicate’s narrative. The evil demonization of Muslims, which Winter Watch covers regularly, has been quite pervasive and successful.

‘Get The F*** Out’: Gun Store Owner Confronts Sacha Baron Cohen After He Enters in Disguise