This week, globalists and criminal cabals worldwide will undoubtedly be celebrating the announcement of China Joe as the 46th POTUS and Kabala Harris as the nation’s first female veep.

Say what you must about Trump, he did make some progress toward restoring the sovereignty of the United States. Now, after four years of non-stop Lugenpresse “Orange Man bad” propaganda, our country has taken a giant step backward. The old guard used the playbook of Saul Alinsky and ideology of Karl Marx to retake the asylum.

Before long, Americans will not only have to rely on foreign countries for medications and consumer products, we will have to rely on foreign food, as our ag and cattle farms are turned into fields of weeds that supposedly filter carbon from the atmosphere. We will have to go back to relying on foreign oil — but not for long. Auto manufacturers will be given a deadline to stop production of gasoline-powered vehicles, just as has happened in California, which is “Green New Deal” Kabala’s home state.

Was this really what Americans wanted? I doubt it. Nevertheless, here we are. So let’s have a little preview of what we can expect from a Harris-Biden administration.

Biden announced on Thursday night that his first order of business is covid-1984. It begins with an immediate nationwide mask mandate. You’ll be required to wear a mask on federal property, which means while driving on federal highways and in federal parks. He said he will encourage governors to impose mask mandates — even when people are alone outdoors — and he will strong arm state leaders who do not comply.

Biden also promised “free” vaccinations. Of course, nothing is ever “free.” In Democratic Party speak, “free” means corporate looting. Americans — not the insurance companies — will be expected to burden the cost down the road, and that cost will not be negotiated. It means pharma companies can go back to charging the U.S. five times more than Europe and other countries around the world for the same products and services just as they’ve done for the last couple decades.

Biden has been acting coy about making vaccines mandatory.

Another part of the scamdemic plan is national contact tracing. Yep, big tech is lining up for this one. Look for Amazon, Google and Microsoft to quietly obtain big taxpayer-paid contracts to trace your whereabouts 24/7 and provide the federal government with every detail of that information upon their request. If there’s a lockdown and you leave your house, boom! Civil penalty.

After a couple weeks of deep draw downs on value stocks, the markets began rallying last week. For me, the reason was clear: Capitol Hill promised it would revisit Pelosi’s $3.4 trillion taxpayer looting bill after the election. After weeks of watching the pleebs flee the markets out of fear, the vultures swooped in and bought big to front-run the foam party.

Over the weekend, Biden announced himself leader of the free world. This could’ve — and should have — tanked the markets on Monday. But the vaccine developers came to his rescue. Before the markets even opened Monday, several, including Pfizer made big announcements, which goosed Wall Street and allowed for headlines like the one below.

Never mind that Pfizer’s announcement has been expected since mid October. That sort of timing could’ve — and probably would’ve — helped Trump’s reelection bid. That’s the last thing big pharma wanted. Pfizer’s CEO Albert Bourla told CNN the timing of their announcement had nothing to do with politics. He said he hasn’t even fully read his company’s report yet. Uh, huh. Sure, Al.

Pfizer is among many big pharma firms that provided Biden’s campaign with millions of dollars.

THE AMERICAN PROSPECT: The Biden campaign’s ties to the drug industry go much deeper than the contributions it has received. His campaign chairman and top aide, Steve Richetti, is a longtime healthcare lobbyist who has personally represented drugmakers Novartis, Pfizer, Eli Lilly and Sanofi on issues related to pricing and patents, among other matters.

Novavax wasn’t supposed to make any announcements until the end of November, but it also jumped on the bandwagon Monday to tout their success.

In addition to the looting of taxpayers, we predict that a key feature of the Harris-Biden administration will be the deployment of occasional hate crime hoaxes to strategically elicit public outcries for policies that erode the constitutional rights of Americans, such as our freedom of speech, our right to privacy and our right to bear arms, as well as gin up support for the race industry.

This isn’t a blind hunch. The writing is on the wall. The so-called “fourth pillar” of Biden’s Build Back Better plan is to throw $150 billion at black, brown and native people to help them overcome “institutional racism.” And Kabala Harris, while affecting a stilted southern-black accent, has complained for months about contrived “microaggressions” and the need to eradicate “inherent bias.” But how?

How can the race industry psychologically reprogram white people on such a micro level that they lose all sense of self-identity and self-preservation? Nobody has ever thought to ask Kabala this question.

We do know that at least on a couple of occasions, people in Kabala’s immediate orbit have been caught perpetrating hoaxes. And yet, unsurprisingly, none were ever held accountable for their deception. The first instance that comes to mind is the well-known case of Jussie Smollett. The second is the lesser-known case of a secret law enforcement cabal tied to her Kabala’s office when she was California’s attorney general. But first things first.

In June 2018, junior Sen. Harris introduced an anti-lynching bill in the Senate that wasn’t garnering as much attention as she had hoped. Sen. Rand Paul called it overly broad and claimed it left the door open for a mere scratch or a bruise to be prosecuted as a lynching.

Six months later, actor Jussie Smollett reported to police that two MAGA supporters jumped him and placed a rope around his neck. He posted hospital pictures on social media that showed off scratches of bruises on his face. What a cowinkydink. Of course, Kabala immediately began tweeting about this “modern-day lynching.”

If you need a refresher on what the Smollett incident was all about, Dave Chappelle sums it up for you.

Well, it turns out Smollett and Harris are “good friends.” Whodathunk. Harris also happens to also be close friends with Kim Foxx, the Chicago prosecutor whose office was behind the controversial decision to drop the charges against Smollett for his fake hate crime hoax.

Other photos also began to emerge showing Smollett mingling with political leaders in Washington, D.C., including the Obamas at the White House and Maxine Waters.

How did this 30-something supporting-role TV actor from California make his way into the political circles of Washington, D.C.’s elite? Apparently others were asking the same question. Eventually, a story emerged on the Internet claiming that Smollett is Kabala’s nephew. This claim was quickly and widely debunked all over the Internet and by all of their MSM defenders.

However, the nephew story may have been a distraction. It appears that it is possible that they are cousins, meaning that Harris father, Donald Harris, would be the older brother of Jussie Smollett’s mother, Janet Harris. Both Donald Harris and Janet Harris attended Berkeley in the ’60s and were involved in an organization that later became the Black Panthers. 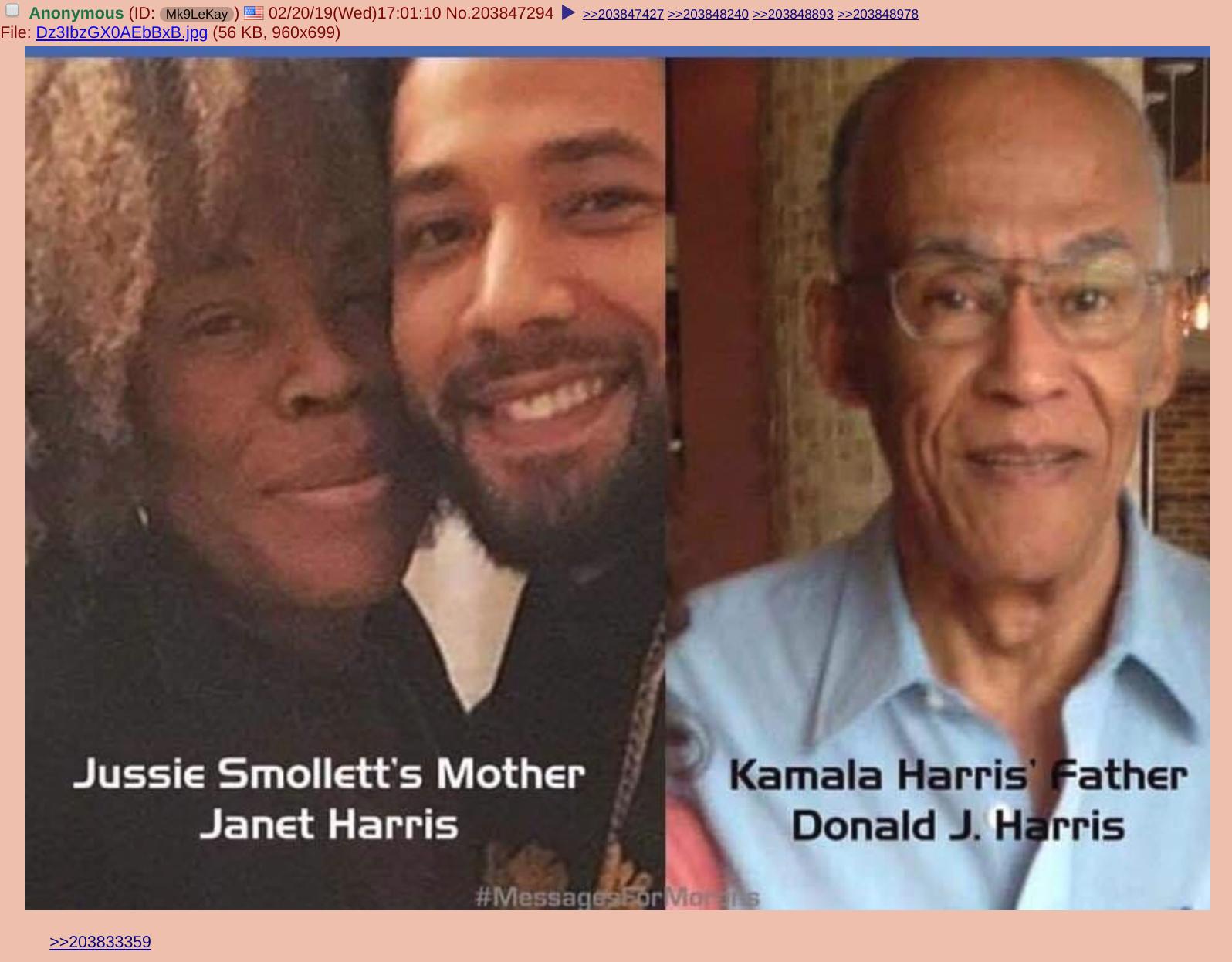 The Clover Chronicle provides a trove of information. Nothing to see here, move along?

When posing the possibility that some of the so-called “hate crimes” that are exploited by the media could actually be hoaxes, people sometimes logically ask, “How is it possible? How could so many different people — from victims to first responders and district attorneys — all be colluding to create a staged event?” 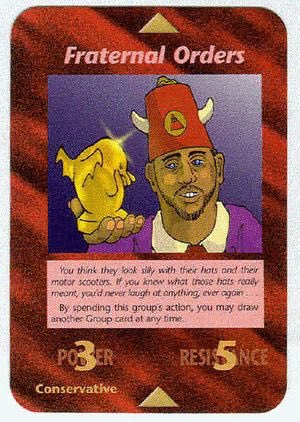 If you haven’t done so already, read our post published on Oct. 31 called “Fake Illuminati Police Dept. or the Real Deal? The Freemasonic Connections of Kamala ‘Kabala’ Harris.” It helps in understanding how people, through common political and organizational ties, can work together to create the appearance of a legal system while operating outside of it.

In that post, we left it up to the reader to decide whether the Freemasonic police unit tied to Kamala Harris’ office was real or fake. While I believe that it is quite possible that Freemasons have their own internal policing of sorts, and it’s clear that the “officers” involved in this special unit were in fact Freemasons, I do not believe these three people — one of whom was an aide to California Attorney General Kamala Harris in 2015 — was in fact a recognized law enforcement unit for any Freemasonic organizations. Rather, this was Harris’ own special secret police force that she organized to do her bidding, whether its stage hoaxes or cover up the crimes of her buddies.

According to reports, while Kamala Harris was California’s Attorney General, she refused to prosecute Mnuchin and Soros’ OneWest bank for fraud in 2013 without giving any reason. Foreclosure violations reportedly left thousands of homeowners with eviction notices.

On social media sites suggestions were raised that Harris was the VP pick of George Soros and the Democratic Party, and that having California Senator, Harris as a running mate was not Biden’s choice.

[A] clandestine group or faction of subversive agents [foreign or domestic] who attempt to undermine a nation’s solidarity by any means at their disposal. … A cardinal technique of the fifth column is the infiltration of sympathizers into the entire fabric of the nation under attack and, particularly, into positions of policy decision and national defense. From such key posts, fifth-column activists exploit the fears of a people by spreading rumours and misinformation, as well as by employing the more standard techniques of espionage and sabotage. — Encyclopedia Britannica

The Arrival of the Gen-Z Confusexuals

What’s This New Coronavirus Outbreak Really All About?

9 Comments on What we Can Expect from a Biden-Harris Administration: Abject Looting, Scamdemic Tyranny, Hate Crime Hoaxes and Secret ‘Police’