It’s all so predictable. Taking a page out of their 2016 playbook, left-wing anarcho “activist” crybullies are defacing and łdismantling historic statues again.

Poorly educated young people have been placed on the warpath. They’re filled with angst and emotion instilled by education systems that brainwash young minds to self-loath and a propaganda-driven media complex that demonizes America’s founders. And, I suspect, after months of lock downs, they’re stoked to be out socializing. Bars and schools and closed because of COVID, but it’s okay to demonstrate, riot, commit arson, theft and vandalism. Oh boy!

These impressionable young white people — who couldn’t survive a day without their phone or social feed — fail to comprehend what it might’ve been like to live in a time other their own. They don’t seem to care either.

Yes, some black people 400 years ago — people with whom they have no discernible ties — were enslaved as house and farm labor by a minority of wealthy white plantation owners in only 13 out of the nation’s 33 states. Slaves were expensive. Just being white didn’t entitle a person to a slave.

Though the number of non-slave-owning white northern Americans who died to end slavery during the Civil War (360,222 Union soldiers) is approximately equal to the number of wealthy white southern American households who owned a slaves (est. 350,000), every white person in modern America today (many of whom are descendants of people who didn’t live in U.S. prior to 1860) must be punished. Yeah, that makes tons of sense. 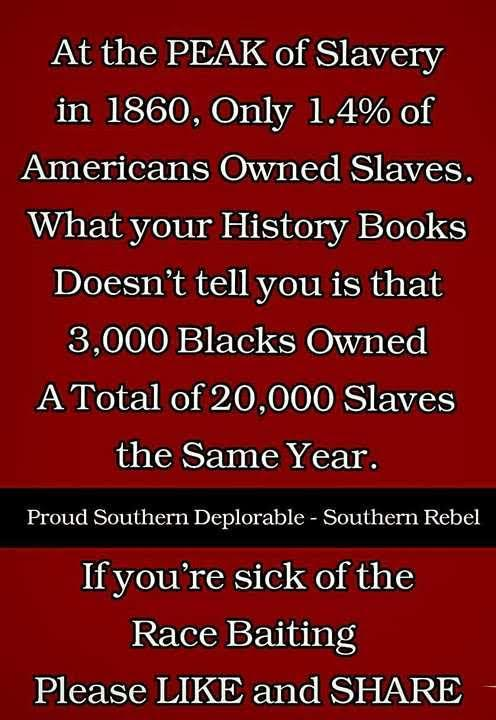 Nope, this isn’t really about slavery. That score was settled long ago.

In terms of institutional racism, this was addressed with Affirmative Action (AA) and other programs and practices during the last 60 years. Though AA is not longer codified, it’s still widely practiced. For example, though blacks make up 12% of the U.S. population, they comprise 16% of ungrad students and 14% of graduate students.

So this is all about strategic political posturing and positioning by the left for a November 2020 power grab. They are trying to motivate blacks to vote — especially black men who didn’t turn up to vote for Hildy in 2016. The 2020 race is expected to also be close.

So Democrat/faux “liberal” action groups are pulling out every trick in the book to inspire young people and black people to hold their nose and vote.

But the spectacle of deconstructing history didn’t inspire black males to vote for Hillary in 2016. Why do they think it’ll work this time? Because it’s more organized and radical?

Educators and the media have warped young minds into believing Secular Democrats care for them, that they’re the morally righteous arm of government, and that Antifa are simply “protesters against fascism.” It’s the Christian white people (aka Republicans) who are evil racists. Shit you not. You can’t make this stuff up. Oh, wait. I guess you can.

Speaking of making stuff up, a lengthy rant in Medium helps explain the position of Black Lives Matter toward white people. No, dear white people. Protesting with them doesn’t mean you’re not racist — nor is having a black spouse, adopting a black child or having black friends.

Yes My Dear, All White People Are Racists

… We don’t need or want your kind of White people around us who cannot admit they are racist because they are incapable of dealing with the collateral damage of the moment. That’s not the White freedom fighters we want on our teams. Admit it [you’re racist] so we can go on.

White people and non-White POC living as White who cannot acknowledge these truths are saying they don’t want to relinquish the power and privileges assigned to their places in the social/racial order set by White Supremacy. Embracing that means that you also embrace mistreating me, taking from me and my children, separating me, and making my pathways more difficult so that you may have pathways that are smooth paved with gold, or titanium. …

Did you get that? They want you to relinquish your power and privilege. Kneeling, prostrating yourself, voting for a black president, institutionalized and non-institutionalized affirmative action, it’s all “not enough,” they say. You have to “give up your power” (whatever that means) or else you’re a white supremacist.

In the meantime, here’s a roundup of the official and unofficial removals of historic figures, which you might have missed during the riots and looting. Make no mistake, whitey. This is a symbolic castration of you.

Jefferson Davis was a racist & traitor who fled our city as his troops carried out orders to burn it to the ground. He never deserved to be up on that pedestal. July 1, we will begin the process the state requires to remove these monuments to the Old Richmond of a Lost Cause. 1/4

This Tuesday 6/9 we are gathering at Byrd Park to protest yet another racist monument. Christopher Columbus was a murderer of Indigenous people, mainstreaming the genocidal culture against Indigenous people that we still see today. Bring your sage, drum, jingle dress, and mask! pic.twitter.com/l3PqkDKfZS

In the center of Old Town in Alexandria, an Appomattox statue was removed by state leaders. The bronze memorial was erected in 1889 to honor Confederate soldiers from the Virginia city. Democrat Mayor Justin Wilson tweeted his approval.

Alexandria, like all great cities, is constantly changing and evolving. pic.twitter.com/CZTjlOkpfT

In 2020, we can no longer honor a system that was based on the buying and selling of enslaved people.

Yes, that statue has been there for a long time. But it was wrong then, and it is wrong now.

So we’re taking it down.

United Daughters of the Confederacy notified the city that they would take possession of the statue.

In Portsmouth on Wednesday, vandals destroyed a confederate monument. In a twist of irony perhaps, a falling statue nailed a protester in the head.

Mayor John L. Rowe, Jr. said in a statement that the Portsmouth Police “did the right thing” in “confining the vandalism to the one piece of public property,” so as to protect lives and the remaining private property in the area. He’s now looking at deconstructing the entire monument.

Regarded the repeated vandalism of a statue of Columbus in Boston, Democrat Mayor Marty Walsh said, “This particular statue has been subject to repeated vandalism here in Boston, and given the conversations that we’re certainly having right now in our city of Boston and throughout the country, we’re also going to take time to assess the historic meaning of this action.”

Democrat Gov. Governor Walz on Wednesday said he understands the impact that the symbolism of a statue can have on people

“I hear it get pushed off as ‘frivolous’ or ‘political correctness,'” he said. “These are historical pains that led to what we saw happen with George Floyd and the anger that came out.”

Louisville has been maneuvering to remove its Confederate monuments and statues since 2016, according to reports.

“Our city must not maintain statues that serve as validating symbols for racist or bigoted ideology — that’s why we relocated the Confederate statue near the University of Louisville,” Democrat Mayor Fischer said.

During a so-called “peaceful protest” on Tuesday, June 9, on the steps of City Hall, Republican Mayor Lenny Curry announced that all Confederate monuments citywide will be removed. This includes three monuments and eight historical markers, the mayor’s office told CNN in a statement.

On Sunday, May 31, during a protest demonstrators attempted to tear down a 52-foot-tall obelisk. Black Birmingham Mayor Randall Woodfin arrived at the scene and pleaded with demonstrators to disperse before police came to make arrests. He vowed to “finish the job” for them.

At the University of Alabama on June 7, the president and Board of Trustees approved the removal of commemorative plaques across campus. Campus administrators are also reviewing the names of buildings.

In Birmingham, demonstrators tore down a 112-year-old statue of Gen. Robert E. Lee that stood in front of Lee High School in Montgomery on June 1.

In Mobile, the city removed the statue of Confederate Adm. Raphael Semmes from downtown early Friday and took it to a secure location, Republican Mayor Sandy Stimpson said.

“It is about removing a potential distraction so we may focus clearly on the future of our city,” Stimpson wrote on Twitter. “That conversation, and the mission to create one Mobile, continues today.”

A statue of Edward Carmack, a politician and jourlaist in the early 1900s who wrote editorials lambasting the writings of prominent Tennessee civil rights journalist Ida B. Wells, has been toppled. The statue was dedicated by pro-prohibition women’s group. Carmack was a leader in the state’s temperance movement.

My favorite desecration was this statue of avid racist Edward Carmack who nearly got Ida B Wells lynched. It’s Nashville! Put a statue of Loretta Lynn out there and throw this in the garbage. pic.twitter.com/KjDLJJfyFk

A petition is now circulating in Tennessee to replace Confederate monuments with statues of Dolly Parton, the Independent reports.

Statues of George Washington and Thomas Jefferson are now in the sights of Black Lives Matter and fascist race industry lapdogs. Don’t believe me? Watch this clip from CNN.

Democrat House Speaker from California Nancy Pelosi said this week that she wants 11 Confederate statues removed from the Capitol.

NASCAR, the stock car-racing league born in the South, announced this week that it’s banning the Confederate battle flag from its events.

A push is also under way to rename 10 southern military bases named for Confederate generals. But President Donald Trump is pushing back.

“The United States of America trained and deployed our HEROES on these hallowed grounds, and won two World Wars,” Trump said in a statement. “Therefore, my Administration will not even consider the renaming of these Magnificent and Fabled Military Installations.”

New Evidence Suggests Cory Booker, Kamala Harris and Others Were in on the Jussie Smollett Hoax (6 Pics)

18 Comments on Dejavu All Over Again: ‘Activists’ Take Down Historic Symbols of ‘Hate’