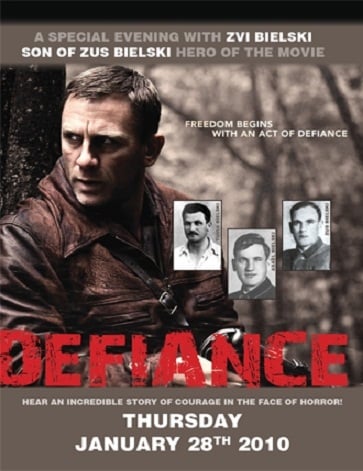 The Bielski Partisans were a group of Jews who hid out in the Naliboki Forest of northwestern Belarus during the Axis Occupation of 1941 to 1944. Their alleged exploits were celebrated in a $50 million Hollywood puff propaganda film called “Defiance” (2008), starring Daniel Craig as Jewish Partisan leader Tuvia Bielski.

The film prompted The Times of the U.K. to opine about the story’s authenticity in its article titled “Country Split over Whether Daniel Craig is Film Hero or Villain.”

At the outbreak of the war, the region in question (near Nowogródek) belonged to Poland. In September 1939, it was occupied by the Soviet Union in accordance with the Molotov–Ribbentrop Pact between Germany and the Soviets. The area of operations in question was at the eastern border of Poland and the Soviet Union before the partition. You can locate Belarus faintly on the map.

Before the Occupation, Tuvia Bielski had received training in the Polish Army. After performing reserve duty, he engaged in smuggling. Under the Soviet Occupation of eastern Poland, the Bielski family and other Jews served as goons and functionaries for the Soviets, with Tuvia Bielski becoming a Soviet commissar. Accordingly, the clan was greatly disliked by local Poles even before the German invasion.

After the German invasion in mid-1941, Tuvia and his three Jewish brothers — Alexander (also known as “Zus”), Asael and Aron — managed to flee into the nearby forests. There in the spring of 1942, the Bielski brothers along with 13 Jewish ghetto neighbors formed the nucleus of an underground Jewish Partisan combat unit.

Over time, hundreds of men, women and children eventually found their way to the Bielski encampment. At its peak in 1944, the unit hosted 1,236 people. Seventy percent of them were women, children and elderly Jews. No one was turned away. Among them, about 150 engaged in armed operations.

The camp took on a dog-eat-dog climate. According to one of Tuvia’s cousins who lived in the camp, her daughter and other women were forced to strip naked upon entry and give up their underwear as a form of “entry ticket.”

Tuvia was known for his authoritarian leadership style and was constantly involved in power struggles with other members of the unit. Israel Kessler and others who tried to organize a group of people to leave the Bielski camp and form their own unit had sent letters to Gen. Platon and other Soviet officials. The letters stated that Tuvia was holding gold and jewelry, which was in contradiction to Jewish Partisan orders to hand over valuables to headquarters.

The Soviet command, concerned about the unit’s leadership, began an internal investigation into an alleged Bielski protection racket.  Chernishev cleared Bielski of the charges following an investigation.

When not extorting the Jewish population for protection, the Bielski Partisans raided nearby villages and forcibly seized food. On occasion, peasants who refused to share their food with the Partisans were subjected to violence and even murder. This caused hostility toward the Jewish Partisans on the part of the non-Jewish peasants.

Belorussian farmers struggled to supply all the forces who were demanding food (German, Soviet and Jewish Partisans).

One of the Partisans described a Partisan as “something between a hero and a robber.”

“We had to live and we had to deprive the [Polish and Belarus non-Jewish] peasants of their meager belongings. Often we took by force from poor peasants who were not even pro-Nazi,” the Partisan said.

The Partisans themselves admitted that they had overabundance of food, and they even sent some of the food supplies to Moscow using delivery planes that supplied newspapers and propaganda materials.

The Bielski unit’s Partisans were primarily concerned with survival. Due to their poor equipment and training, they were not assigned main combat roles. They provided tailoring and cobbling services for Soviet soldiers. But their primary focus was forced requisitioning and looting of food and other supplies from the local population.

Tuvia Bielski was noted as once saying, “I would rather save one old Jewish woman than kill 10 German soldiers.”

When the Germans conducted anti-Partisan operations, the Bielski units would melt away, leaving the hard fighting to Poles. Operation Hermann was a German anti-Partisan action in the Naliboki Forest area carried out between July 13 and Aug. 11 of 1943. The Polish Home Army (Resistance) lost 120 men and was forced out of the forest.

Despite the hype in the movie “Defiance” about killing thousands of Nazis, according to historian and author Kazimierz Krajewski, a November 1943 report from Tuvia to the Soviet command stated that in two years’ operations, their group of nearly a thousand people had managed to kill 14 Germans, 17 policemen and 33 spies and provocateurs.

But Krajewski adds that even that number is exaggerated in terms of Germans. With the Germans on the run and in retreat they finally managed a little combat success on March 22, 1944, when 20 Jewish fighters ambushed a German convoy and killed 12.

As a result of these Partisan actions, the Germans ordered the villagers to form their own armed self-defense units called the Belarusian Auxiliary Police. Thousands of Belarusians were killed, including teachers, local administrators, and dozens of Polish communities were destroyed by Partisan death squads.

Primarily, the Bielski Partisans extracted revenge against the locals they judged as unfriendly (collaborators). These non-Jews were primarily those who didn’t fully consent to being regularly terrorized, looted and robbed. The Polish resistance officially complained to the Soviets about alleged rapes and murders, including the murders of young children committed by Jewish Partisan groups.

Bielski Partisans were accused of war crimes against the neighboring population, particularly of involvement in the 1943 Naliboki Massacre of 129 persons.  Partisan goons reported to the NKVD the killing of 250 people, the capture of weapons, the rounding up of 100 cows and 78 horses, and the destruction of a German garrison. In reality, Naliboki went undefended. In reality no Germans were present or killed, and only one Belarusian Auxiliary policeman happened to be sleeping in the town on the night of the attack.

Polish men were dragged from their homes and shot individually or in small groups. Mass looting followed. Many farmhouses were set on fire. The town’s church was set on fire, along with the public school, fire station and post office.

In May 2003, prosecutor Anna Gałkiewicz, from IPN’s Commission for the Prosecution of Crimes against the Polish Nation, was in charge of the investigations into the massacres in Naliboki and Koniuchy. She reported that surviving eyewitnesses from Naliboki recognized Bielski Partisans as participating in the attack.

By September 1943, the Soviets began a policy of confrontation against the Polish anti-Nazi underground, which it saw as a threat to their aims in eastern Poland. In December, the Soviets drew the Polish resistance into a trap by inviting a contingent to “friendly talks.” They then surrounded the Poles and threatened to execute kidnapped Polish officers unless the unit surrendered. Bielski’s unit participated in this operation. Most of the 135 Polish soldiers and nine officers were then “disappeared.”

After the betrayal of the Polish Resistance, open warfare broke out between the two factions. In a surprise attack against a Home Army unit (Resistance) in December 1943, more than a dozen Home Army soldiers were murdered; and in following days, 50 more were killed.

On March 5, 1944, a Belinski fighter detachment jointly attacked with Soviet forces a group of Polish fighters, killing 47 and injuring 20 more.

In May 1944, the village of Kamień in Stolpce was attacked by a force involving Bielski Partisans. Twenty Polish Home Army soldiers and 20 civilians were killed. That same month, a unit of the Ordzhonikidze sub-group of the Bielski Partisans, together with Soviets, murdered 47 Poles in the Lida region, in Filonowiec and Dokudowa.

After the Soviets retook Belarus in the summer of 1944, the NKVD interrogated the Bielski brothers about the rumors of the loot they had reportedly collected during the war and about their failure to “implement socialist ideals in the camp.”

Asael Bielski was conscripted into the Soviet Red Army and died in the Battle of Königsberg in 1945. The remaining brothers escaped Soviet-controlled lands and emigrated to the West and ultimately Israel. Yehuda Bielski, the brothers’ first cousin and fellow Partisan, moved to Israel to fight in the Irgun.

The Dreadful Chronology of Gaddafi’s Murder

Putin’s People Would Like to Have a ‘Word’ with William Browder, and Here’s Why

Priti Patel Resigns Amid Revelations Of Conspiring With Israel To Give U.K. Tax Money To Terrorists, Israeli Military

4 Comments on Hollywood’s ‘Defiance’ of History: The True Story of the Bielski Partisans of WWII

#TrumpVsBiden Whitney Webb reports that US and UK national security have allowed that the techniques they have deployed against terrorists in the past are now to be deployed against citizens who are "vaccine aversive" to identify and isolate them by force https://jamesfetzer.org/2020/11/whitney-webb-cyber-war-declared-in-u-s-and-uk-to-quash-vaccine-hesitancy-as-nations-prepare-for-mass-inoculations/