The New Nationalist (TNN) will be checking in on the national “Refuse Fascism” protest throughout the day. Most are late afternoon events, and event organizers told the mainstream media that they would like it to last through Christmas. We covered who’s behind the “Nov. 4 It Begins” protest in this earlier post.

The big question is whether this will get out of hand. What kind of optics do the controllers plan? Could we see more contrived and staged violence between the so-called Alt-Right elements and Anti-Fa? Despite what mainstream fake news tells you, this is an Anti-Fa event — and it seems to be an annual thing. Here’s a poster from last year’s protest. 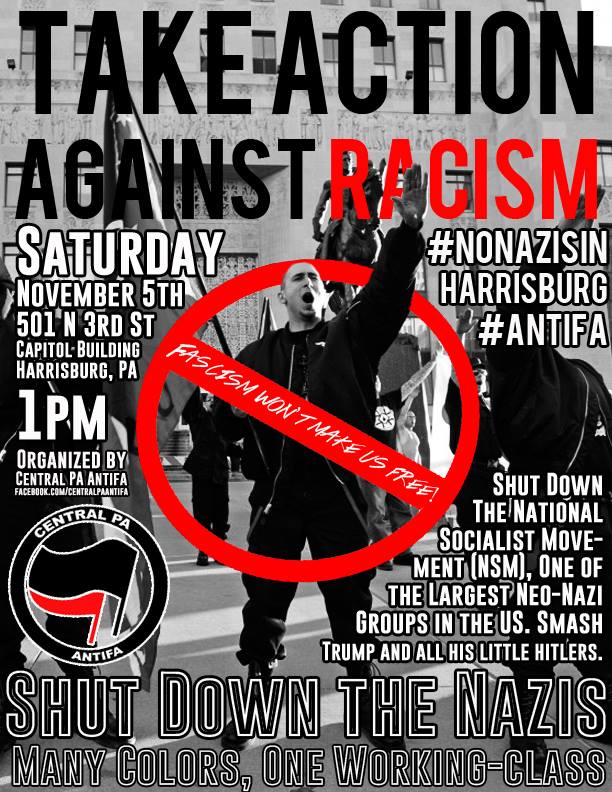 Given the magical-thinking acceptance of staged deceptions by the masses, could we see another Charlottesville type of hoax? If so, TNN suspects this one might be directed at Anti-Fa, leftists or a black version of a Dylan Storm Roof boogeyman. This toggling back and forth gets just about all observers lathered up. It’s essential agitprop toward taking down the whole nation.

Interesting timing for this event. The New York City marathon will be held on Sunday, and the mayor vowed there will be heavy police presence, barriers and snipers because of last week’s bogus “ISIS” attack.

Could a mass protest lead directly to our predicted topple of Donald “The Red Queen” Trump? Many regimes historically have gone down in the face of large-scale demonstrations and protest. Trump has managed to register his lowest approval rating since the election and is increasingly isolated.

Trump departed for a 10-day trip to Asia yesterday. Ten days is a rather lengthy amount of time for a sitting president to be out of the country. Is this trip actually a flight for safety?

Elizabeth Warren: From Crusader Against the Crime Syndicate to Stepford Wife of the DNC

Out of ‘Nowhere’ Comes the Next President of France: Oligarch Puppet Emmanuel Macron