A very common trait and indicator of the deception of a liar is nodding or shaking of the head in a manner inconsistent with a given answer. For example, shaking “no” while explaining your version of the story. The physical indication is usually the truthful answer.

Body language gives clues to the emotions we are experiencing. Therefore, the ability to read body language is a powerful tool for detecting deception. When people are lying, they usually feel some discomfort or stress, which manifests itself through body cues. Prince Andrew’s  body language in his recent interview with the BBC (available below) conveyed that deep down inside, he just wants to confess. It’s literally a lie detector in his case. We have examined other liars who seem to have trained themselves to counteract this natural tendency. But Andrew, who lives in a bubble, is not that accomplished at public lying.

Many liars engage in duping delight. Andrew rarely does this.

Andrew’s head shaking and nodding is almost on automatic. He is an easy subject to analyze. We aren’t talking about shaking his head when answering a straight-up denial question. But he does it throughout an entire rambling pontification. What’s rather strange about him is that he didn’t seem well prepared and lied too much, even when not probed by the questioner or when it was unnecessary to say anything at all. 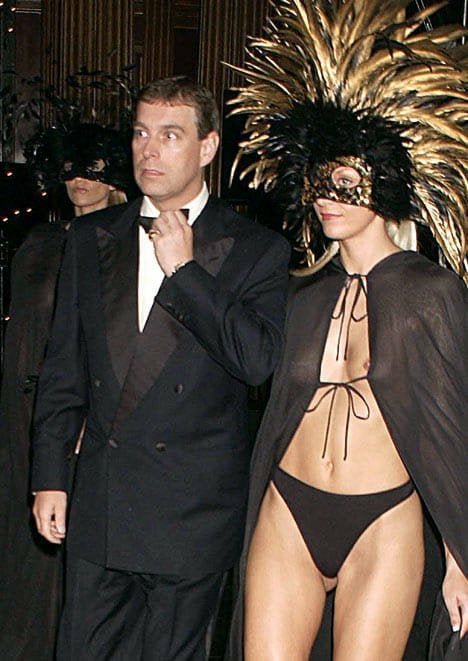 This minute-by-minute video analysis is based solely on his active head movements:

00:01:10 – Andrew states that he met Ghislaine Maxwell at university. His head shaking suggests that he met her under other circumstances.

00:01:30 – He states he didn’t spend much time with Jeffrey Epstein but then admits to meet ups about three times a year. His head shaking indicates he’s not being forthright.

00:01:50 – He said that it would be a considerable stretch to say Epstein was a close friend. Here he is nodding his head, and being truthful. Does this suggest his true feelings and that this was more about being compromised and manipulated than a friendship?

00:02:35 – Andrew tries to dispatch the rumor of his reputation as a party animal. The head shaking here is quite profound, indicating deception. He states, without shaking his head, that he was single “in the early ’80s.” Then, at 00:02:50, he says after he got married he was quite happy and “never really partied”– oh, dear, the head shake here is quite pronounced, indicating deception. I for one, am not in a position to condemn him for being a party animal or for liking the wilder women (but not girls). But why does he damage his credibility by lying about it. It is quite well documented. He should just shrug it off, and not offer the mockers more ammo.

00:03:00 – He states, with a noticeable head shake, that going to Epstein’s residences was not about partying and women. Deception.

In the next section, up to 00:04:15, Andrew seems truthful and sincere as he explained the initial reason (to learn or get the memos as we say at Winter Watch) he had started hanging out with Epstein’s circle of Wall Street types. However that was not the eventual reason.

He says Maxwell secured Epstein’s introduction to the royal family at Windsor Castle in 2000. Truthful.

Up to 00:06:00, he denied seeing signs of abuse at Epstein’s residence. Shaking head, not being truthful.

Up to 00:07:15, he truthfully acknowledges being a guest at various residences of Epstein’s and Maxwell’s. When asked at 00:07:10 whether he was aware of Epstein’s trafficking troubles when he invited him to his daughter’s 18th birthday party, his denial answer is unclear. He may not have known the full gravity.

00:07:45 –  When asked about his reaction in 2006 when Epstein was jailed, Andrew stated truthfully that he ceased contact. But then 00:08:00, he lies when saying he wasn’t in contact with Epstein until 2010. We surmise he cut back, but then reengaged at some diminished level.

00:08:30 – He said that after Epstein’s troubles, he went to New York City to have a man-to-man talk about their relationship. He’s being truthful, although also states that “he had other business” in NYC, a deception.

00:10:00 – He claims that after their “walk in the park,” they agreed to have no more contact. Andrew is shaking his head, a deception. We would suggest this was a strategy session, and that Andrew was lured to the park for another kompromat photo by Epstein and his crew. He was even asked about this lure aspect and never really answered. He just said (truthfully perhaps) that he didn’t really know.

00:12:00 – He admits that despite the split, he stayed at Epstein’s mansion and attended a dinner party.

00:13:00 – During this walk-and-talk in the park and stay with Epstein, young girls were spotted coming and going from Epstein’s mansion. Andrew said, while shaking his head, that he wasn’t party to all that, a deception.

00:14:00 – He denies an allegation by John Brockman that he was receiving foot massages from a young Russian girl during this stay. Body language indicates some level of deception. He says he doesn’t know Brockman while shaking head.

Of course, the notion that Prince Andrew, a member of the British Royal Family, took four days out of his busy royal schedule in order to to spend FOUR days with a convicted pedophile because he thought that was the “honorable” thing to do is preposterous on its face, even without the head and body analysis.

A Winter Watch takeaway: To our eyes, it seems that Maxwell — not Epstein — was the real handler or fixer for both Epstein and Andrew.

00:18:10 – He states truthfully that Maxwell handled the logistics of meeting and staying with Epstein.

He’s constantly shaking his head throughout the entire interaction from 00:18:00 to 00:20:00, involving sexual activity with Virginia Roberts, deception. He gives the same tells at other points.

The spiel about a sweating condition, as crazy as it sounds, is unclear- we aren’t making a call based on head language. However, it’s odd that he used this alibi at all, as the Lugenpresse has now produced party photos of Andrew sweating in the company of young women. Here is a 2000 Dublin Sunday World gossip rag article, spotting a sweating Andrew and his partying.

00:22:30 – When pressed about meeting Roberts on other occasions, Andrew is deceptive.

However, the question about having no recollection of the photo with Roberts may be truthful. He’s truthful when he says he doesn’t recall Epstein personally taking photos. At 00:26:20, he’s truthful about being careful and discrete about public photos. Our takeaway is that this photo may be stagecraft pulled off by Maxwell. Where did it come from is our question. Overly focusing on this particular photo may be misdirection; although, for us, it’s clear that Andrew fooled around with Roberts.

00:35:00 – There’s a line of questioning about numerous, very young girls hanging around in Epstein’s residences. I suggest here that Andrew is being truthful in saying “no.” But the question was framed poorly through the vague use of the term “numerous.” We would imagine that servicing Andrew was more discrete.

00:39:30 – He’s being deceptive in his answer about Maxwell. At this stage, he knows full well what his “friend” Maxwell was up to. The problem is that Maxwell can still compromise and blackmail him. Astonishingly, he admits at 00:40:00 to meeting up with Maxwell in jolly ol’ London just before Epstein was jailed last July. Incredible. So Maxwell kompromated him again! He’s lying about having anything to discuss about Epstein.

Andrew literally thought he was getting selective, personalized service from trusted friends, as in “I know a girl you might like while you are in town and are staying at my place.”

He might not even been clear on the age, as 18 is the age of consent in Florida and New York. The use of slightly underage girls in states with tougher age of consent indicates a plan to blackmail and compromise Andrew. He was set up in an a under-aged kompromat honey trap. What kind of “real smart friend” sets you up for sex with a 17 yo in an 18 year consent state, when it would be just as easy to arrange a 18 yo? It’s very revealing that the Lugenpresse focuses more on embarrassing Andrew than pursuing the kompromat operation.

The other sign of blackmail would be to label Andrew as a pedophile. Sex with 17 year old might be embarrassing and inappropriate for Andrew, but it’s not even statutory rape in most states and is certainly not pedophilia. I will bet Andrew thought he was having sex with a 19 or 20 year old in a state where 16 is the age of consent. And we doubt he checked with his lawyer. Andrew was no match for the likes of tricky Epstein and Maxwell.

Another sketchy aspect: Why was Andrew singled out to be thrown under the bus? Did he stand up to this crew at some point and refuse to carry out some order?

There are others who Epstein and Maxwell ran through even worse kompromat. Where are they? Here is a network graphic of movers and shakers with ties to Epstein-Maxwell.

Is there something much more sinister going on here? Could this be a warning to the entire heavily compromised British (and U.S.) sistema that the dossiers and the knives are coming out, if the UK doesn’t cooperate in the next Middle Eastern or Iranian war?

What Happened to Prince Andrew?

The Romanian anti-Jewish nationalist leader Corneliu Codreanu (1899-1938) was fully aware of how the sistema and Jewish kompromat works. Codreanu’s description of such operations succinctly demonstrate what happened to Andrew. Age-old methods were employed [see “For My Legionaries” (1936)].

Some things never change and, if anything, have been developed into a science. Besides, providing skirts/sex and base personal favors, which would include letting Andrew use high-end residences, we imagine flattery was employed. Ultimately, they owned Andrew.

I. For winning over local politicians:

1. Gifts
2. Personal favors
3. Financing the political machine for propaganda, leaflet printing, traveling expenses, etc. If there are several bankers in town or rich Jews, each is assigned to a specific political party.

II. For winning over local authorities:

1. Corruption, bribery. A policeman from the smallest town in Moldavia, in addition to the pay he receives from the state, gets monthly another salary or two. Once he accepts a bribe, he becomes the Jews’ slave and if he does not follow orders, then they use on him the second weapon.

2. Blackmail, if he does not comply, his bribe-taking is revealed.

4. If you lack all of these defects, then they will employ the lie, whispered or printed calumny, and denounce you to your superiors. In the market towns and cities invaded by Jews, local authorities are either in a state of bribery, a state of blackmail, or in a state of destruction.

III. In order to infiltrate into various circles or around some highly placed people, they use:

David Duke for US Senate

8 Comments on Body Language Analysis: BBC Interviews Prince Andrew — But Did He Lie?