MONDOWEISS — Some good news. Three women at a Unitarian church outside Boston insist on showing a movie critical of Israel, even when the Jewish community tries to censor them. This story can only embarrass the organized Jewish community in the end, on free speech grounds, and serve the cause of Palestinians human rights.

The “Occupation of the American Mind” is a documentary about how and why Americans have such an uninformed view of the conflict. It features Noam Chomsky, Norman Finkelstein, Yousef Munayyer, Rula Jebreal, Amira Hass, Rashid Khalidi and Steve Walt, among others, and has been endorsed by Deepa Kumar, Avi Shlaim, Neve Gordon, Medea Benjamin, etc. Doug Rushkoff says:

“A stunning exposé on how propaganda drives public opinion and, in turn, our understanding of reality. Here’s the story of how American perceptions of the Middle East — as well as resulting legislation and military strategy — are engineered: from focus group to talking points to mortar fire.”

The film is scheduled to be screened Sunday afternoon at the Unitarian Universalist Church of Marblehead and there’s a ton of resistance. A couple of rabbis along with people who work at a foundation dedicated to enhancing Jewish identity by creating connections to Israel have led a drive to have the screening cancelled. They got 158 signatures, mostly from the Jewish community, in opposition to the Occupation doc.

The three women from the church’s social action committee who booked the film are standing tall. But the resistance to the film has demonstrated the film’s theme. You try to speak fairly about the conflict in the U.S., and people get very angry, and do what they can to shut you down.

The Occupation of the American Mind, which is narrated by Roger Waters, has never been subject to such censorship forces before. That is also a good sign, probably. There has been some pushback at campus screenings, I’m told: the UCLA appearance drew hostile comments in the Daily Bruin, Breitbart and Jerusalem Post; and the Case-Western screening got letters in the paper. But the film has shown hundreds of times around the country without incident. […]

The Ancestor and Old Culture Reclamation and Revival 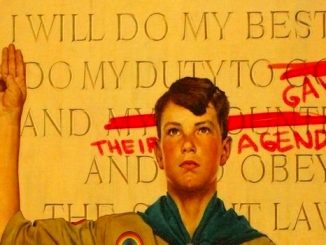 The Discordian Pederast Destruction of the Boy Scouts of America

More Revelations About the Nature of the ‘Capitol Coup’
https://www.winterwatch.net/2021/01/more-revelations-about-the-nature-of-the-capitol-coup/ https://twitter.com/almightygenie/status/1350913237060100100