The transnational drug trade is worth up to $400 billion a year and accounts for about 8% of all international trade. A terminally corrupt financial system has been set up to facilitate narcos via money laundering and corruption. 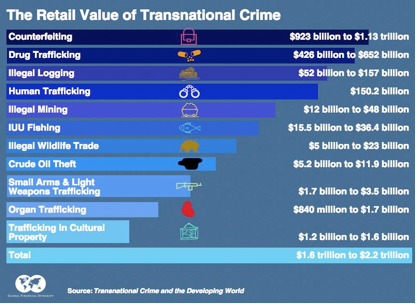 Willful criminality is at the apex of the financial pyramid that, aided and abetted by the U.S. Justice Department and the federal regulatory apparatus (Star Chamber sistema), has allowed economic predators to walk with token monetary slaps on the wrist. Not one individual banker has been prosecuted for illegal involvement in the drug trade.

The bank ponied up a mere $160 million to launder $378 BILLION in cash. Seems like a good ROI and encouragement to engage in this illicit activity. Wachovia at the time of its Wells Fargo merger had $448 billion total deposits.

At that time, Wachovia was providing three main services for their international cartel clients: wire transfers, a “bulk cash service” and a “pouch deposit service” to accept things like checks and traveler’s checks, which is was what turned Woods on to the problem in the first place.

Woods was ordered to cease and desist, as his employer told their own anti-money-laundering officer that he had no legal requirement to investigate money laundering overseas while at another Wachovia branch.

“After the Wachovia case, no one in the regulatory community has sat down with me and asked, ‘What happened?’ or ‘What can we do to avoid this happening to other banks?’ They are not interested,” Woods said.

Charles A. Intriago, president of the Miami-based Association of Certified Financial Crime Specialists has observed:

“If you’re an individual and get caught, you get hammered. But if you’re a big bank, and you’re caught moving money for a drug dealer, you don’t have to worry. You just fork over a monetary penalty, and then raise your fees to make up for it. Until we see bankers walking off in handcuffs to face charges in these cases, nothing is going to change,” Intriago adds. “These monetary penalties are just a cost of doing business to them, like paying for a new corporate jet.”

After the settlement, Wachovia merged into Wells Fargo in 2008, and the bank continued to be busted for Mexican drug money laundering.

To put salt in the wound, the American taxpayers ended up bailing out Wells Fargo that very same year.

Once the sums get big enough, money ALWAYS finds a path, dirty or otherwise. Updating regulations did nothing but inconvenience the common person.

In 2002, HSBC bought out national Banco Bital, which was the bank of choice for the Sinaloa cartel. HSBC internally rated the business risk of this bank as “standard,” thus giving them entry into illegal laundering rackets and access to huge deposits. This was used as a conduit into a transnational bank, the 7th largest in the world.

A post-script to this skulduggery is that HSBC had made a similar buyout in 1978 of Marine Midland Bank the correspondent of National Bank of Panama to gain entry into the Colombian cocaine traffic.

In July 2012, the U.S. Senate Committee on Homeland Security and Governmental Affairs issued a 339-page report detailing an amazing catalog of criminal behavior by City of London-based HSBC.

The report provides in great detail the failings of HSBC affiliates HBUS in America and HBMX in Mexico:

They now smuggle U.S. dollars across the border into Mexico and look for a Mexican bank or casa de cambio willing to take the cash. Some of those casas de cambios had accounts at HBMX. HBMX, in turn, took all the physical dollars it got and transported them by armored car or aircraft back across the border to HBUS for deposit into its U.S. banknotes account, completing the laundering cycle.

From 2007 through 2008, HBMX was the single largest exporter of U.S. dollars to HBUS, shipping $7 billion in cash to HBUS over two years, outstripping larger Mexican banks and other HSBC affiliates. Mexican and U.S. authorities expressed repeated concern that HBMX’s bulk cash shipments could reach that volume only if they included illegal drug proceeds. The concern was that drug traffickers unable to deposit large amounts of cash in U.S. banks due to AML controls were transporting U.S. dollars to Mexico, arranging for bulk deposits there, and then using Mexican financial institutions to insert the cash back into the U.S. financial system. High profile clients involved in drug trafficking; millions of dollars in suspicious bulk travelers cheque transactions; inadequate staffing and resources; and a huge backlog of accounts marked for closure due to suspicious activity, but whose closures were delayed.

After the cash was deposited in the accounts, peso brokers then wire transferred the U.S. dollars to various exporters located in New York City and other locations throughout the United States.

The too-big-to-jail card was played on the HSBC settlement.

His cry wolf comments reveal why the U.S. government decided to go soft on such criminal behavior and showed quite clearly how there is one law for the richest 0.1% and one law for the rest of us.

”Had the U.S. authorities decided to press criminal charges, HSBC would almost certainly have lost its banking license in the U.S., the future of the institution would have been under threat and the entire banking system would have been destabilized.”

A deferred prosecution agreement (DPA) was cobbled together between the outgoing head of the Justice Department’s Criminal Division, Breuer, and HSBC Europe’s largest bank. At the urging of former U.S. Treasury Secretary Timothy Geithner, no criminal charges were sought–or brought–against senior bank executives.

Keep in mind that the Office of the Comptroller of the Currency had issued not one but two toothless cease-and-desist orders between 2003 and 2010, ordering HSBC to clean up its act, all of which revolved around strengthening anti-money laundering controls. The orders were promptly ignored. If one were a “conspiracy buff” one might even argue this was precisely as intended.

Lanny Breuer and AG Holder were effectively another in a line of captured Crime Syndicate fixers. He recruited elite lawyers from corporate firms, who later became known as the “Breu Crew.” The hope was the crew would find those responsible for culpable actions which eventually contributed to the financial crisis of 2008. But the crackdown never took place.

Breuer was exposed in the must-watch documentary “The Veneer of Justice in a Kingdom of Crime — The Global Banking Syndicate.”

In Breuer’s HSBC settlement, even The New York Times (aka NY Slimes) called the decision not to prosecute a “dark day for the rule of law.”

In December 2011, U.S. Sen. Chuck Grassley (R-Iowa) called for Breuer’s resignation due to his involvement with Operation Fast and Furious (supplying weapons to the traffickers). In October 2011, Breuer stated that he regretted having not done more to raise concerns at the U.S. Justice Department.

Grassley stated that the report was bogus, citing evidence that Breuer was fully aware of the operation and had lied to Congress during his testimony.

Another narco bank, the Dutch Rabobank National, forfeited $368.7 million for allowing illicit funds to be processed through the bank without adequate Bank Secrecy Act or AML review.

Rabobank admitted to knowing that between 2009 and 2012 its BSA/AML program failed in significant ways. Particularly, the Calexico branch, located about two blocks from the U.S.-Mexico border, was the “highest performing” branch in the Imperial Valley region due to the cash deposits from Mexico. Throughout the relevant period, Rabobank continued this practice of soliciting cash-intensive customers from Mexico and elsewhere.

Countdown to the Ides of March Land Mines

More Color on Social Media Skuldruggery: A Problem with Internet Bots and Brigading