Apparently censoring YouTube and banning thousands of content makers over real and imagined slights isn’t enough for the tyrants at the ADL. Proving in spades what neurotic, paranoid minds are at work at the ADL comes news that the organization has deemed the simple “okay” hand gesture as a white supremacist boogeyman symbol.

In its typical preachy whining manner, the ADL talks about “okay” symbol on its website. Yes, pull up a chair and listen closely, goyim.

But strangely the conclusions and background appear quite benign. Winter Watch could just as easily use their text for explaining the time-tested background of the symbol.

The ADL offers caveats, stating that “particular caution must be used when evaluating this symbol,” because “use of the okay symbol in most contexts is entirely innocuous and harmless,” and that since 2017 “many people have been falsely accused of being racist or white supremacist for using the ‘okay’ gesture in its traditional and innocuous sense.”

ADL: The “okay” hand gesture—in which the thumb and  index finger touch while the other fingers of the hand are held outstretched—is an obvious and ancient gesture that has arisen in many cultures over the years with different meanings.

Today, in a usage that dates to at least as early as 17th century Great Britain, it most commonly signals understanding, consent, approval or well-being. Since the early 1800s, the gesture increasingly became associated with the word “okay” and its abbreviation “ok.”  The gesture is also important in the Hindu and Buddhist worlds, as well as in yoga, where it is known as mudra or vitarka mudra, a symbol of inner perfection.

Next, the ADL clues us in that it started as a hoax by members of the website 4chan to falsely promote the gesture as a hate symbol, claiming that the gesture represented the letters “wp,” for “white power.” The “okay” gesture hoax was merely the latest in a series of similar 4chan hoaxes using various innocuous symbols; in each case, the hoaxers hoped that the media and liberals would overreact by condemning a common image as white supremacist.

Inquiring minds wonder who or more likely what these anonymous 4chan posters are? Are these tricksters even real and organic? Sure seems like the usual suspects love to stumble upon so called anonymous posters for their own purposes.

We also learn that suddenly the gesture got more traction when staged-deception Australian white supremacist Brenton Tarrant flashed the symbol during a March 2019 courtroom appearance after his arrest for allegedly murdering 50 people in a shooting spree at mosques in Christchurch, New Zealand. And isn’t it curious that whoever made this gesture “in court” is not even clearly identified? There’s that familiar black magik brainwashing at work again. It works so much better with a blurred face. It conveys that much-desired boogeymen effect.

This rather benign sounding ADL alert works like crying fire in a crowded theater – as a whole cadre of leftist and antifa publications have jumped on board with virtue signalling.

And at the moment there are dozens of scripted looking stories in the lying media taking this “iconography” further by employing classic neuro-linguistic programming and gaslighting tactics.

For instance, the UK Independent offered up this gem: “So, just because symbols originate from ‘sh**posting’ on an internet message board doesn’t mean we shouldn’t monitor them.”

To which we ask – exactly who is this “we” you speak about? School marms? Would that be the authorities? To our eyes, it looks like the slippery slope begins as soon as the ADL draws attention to it. It’s Eddie Haskell on “Leave it to Beaver.”

Actually, ADL CEO Jonathan Greenblatt was more clear about it.

“We believe law enforcement and the public needs to be fully informed about the meaning of these images, which can serve as a first warning sign to the presence of haters in a community or school,” Greenblatt said.

Indeed, here are examples of how this latest walking-on-egg-shells behavior and brainwashing plays out. Yes, people are being sanctioned. Whodathunk?

A Chicago baseball team banned one fan from the stadium for making the sign on a television broadcast, while a US Coast Guard employee was pulled from duty for the same offence.

The ADL has also targeted as hate symbols the bowl haircut (ala Dylan Storm Roof) and the peace sign. I kid you not. 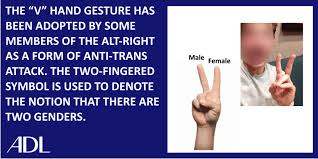 The whole thing should get very tiresome to sensible people. The larger question is why and how it has come to be that neurotics get to frame so much of the discussion. Why, at this stage, should anybody give one damn iota what the ADL and their friends in media spew out? Inquiring minds would like to know: Why is it so often about them?

Why beat around the bush? Why be so cute? We have a much less-confusing symbol for the gatekeepers, tyrants, neuro-linguist programmers and virtue signalers. This is the ultimate resistance: #gofuckyourself.

Kushner: Palestinians Not Yet Capable of Governing Themselves