A radical anti-white takeover and shutdown of Evergreen State College in Olympia, Wash., appears to be in progress as a mob of black and students of color bully campus staff. In the following video, Evergreen’s president announces he will instruct faculty to cancel homework requirements for protesters.

The situation is so out of hand that even “old school” liberal-progressive white professors at Evergreen are being targeted. Last year, the campus held a Day of Abstinence event in which black and Latino students abstained from attending classes to show what a day without them would be like. (Pleasant?) But this year, they demanded white students and faculty be forced off campus for the Day of Abstinence because, they claim, whites are oppressive and threaten their safe space.

One Jewish biology professor, Bret Weinstein — who describes himself as a progressive but not a HRC voter — ended up in the crybullies’ cross hairs for objecting to the removal of whites from campus for a day. He said if a group chooses to abstain from attending to make a statement, that’s their prerogative; but ordering whites off campus would be racist. He also called the protesters the whiniest students he has seen in his 15-year career. The mob now wants him fired.

In the next video, we see a white facility member express concern for his basic rights. Another facility and union member white-guilt shames him. Then, the anti-white witch hunt starts up. The mob is almost incoherent. Clearly, the “why don’t we all just get along” approach does not work.

Unless strong civil rights measures are taken to crack down on these Antifa Marxists, the following scenes could and will show up everywhere. The mob is not being checked and is getting more and more emboldened in revenge fantasies. The school needs to order the mob to stand down and, if they refuse, civil rights enforcement needs to be made. Students who violate the Civil Rights Act should be expelled, student loans revoked and order restored. Any student (of any race) who is having their education disrupted by these maniacs should also sue the school president and college on Civil Rights grounds. Higher education is a privilege, not a right. 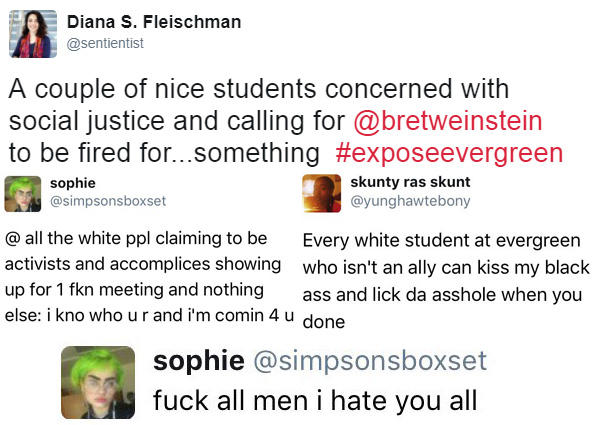 PERSONAL NOTE: If you’re still with me, I’ll tell you what I really see here. I see students using the race card to get out of exams and homework and little more. There’s too much glee and dancing going on among the crybullies to believe there’s any real grievance. They’re reveling in their power over the administration. The more these Washington liberal progressive administrators attempt to appease and placate these crybullies, the more emboldened they become. Instead, the administration must stand up to the mob. Otherwise, every student on campus with a tough test or project due will start or join a demonstration over some manufactured wrongdoing in order to buy more time to prepare or to have their grade requirements waived altogether. I’ve seen this tactic first hand.

The semester after completing an international masters degree program, I returned to campus to audit an elective. As a result, I ended up sitting in with the program’s next cohort — and I was flabbergasted by how they behaved. But first, let me give you my perspective and set the scene.

My small cohort was comprised of white international students age 30 and older who held professional jobs and had families. I was the only American citizen. We worked hard in teams, drank hard after exams and often got the professors or instructors to join us. We towed the line and were respectful. It was a tough program. Only about half the students who were there on Day 1 graduated.

The cohort after mine were predominately 20-somethings. Few worked for a living or had children or a spouse. There were a few Americans, one of whom was a black woman from Atlanta. She was arrogant and rude, frequently talking loudly to other students when the instructor was lecturing. The nice, mild-mannered, forty-something teacher of the four-week class said nothing. He was not an academic but rather from the professional sector. The dean of the program gave him the course outline, the exams and instructions for projects and presentations.

When the first exam was announced at the end of Week 1, the black woman threw a fit. She demanded more time to study and insisted he forego a lecture day to review. Everyone in the classroom was dumbstruck by her temerity and obstinance. The instructor, sympathetic to her and a little shocked, meekly agreed. I was disappointed. I was there for the lecture, not a grade.

The following week, the project was announced. The black girl again loudly argued that more time was needed. This time, the other American students joined her in demanding a longer deadline. The instructor conceded reluctantly.

In the third week, the presentation instructions were provided. This time all the students whined, complained and and feigned confusion. Frustrated, the teacher said presentations could be done in groups rather than individually. He spent one whole lecture day just helping them properly prepare their outlines.

In the fourth week, the final exam was announced. The black girl again staged a verbal protest, demanding that it be a take-home test. The instructor said he would have to consult with the dean, who ended up telling him no. When he delivered the bad news to the class, the black woman screamed at him and called him names. This time, the class didn’t back her up. She went too far.

The day before the big final, the instructor announced he would let students take half the test home, if they kept his concession a secret. He said he would weight the take-home part higher than the in-class portion. And he spent the entire four-hour class helping the students prepare for the in-class portion, basically giving them the questions and answers. He also apologized to me for having to cut a half the course material from the lecture series because of time consumed by the “special needs of the class.”

Yep, the loud crybully black girl got her way. The rest of the students got very little out of the class except a lesson in how to bully a teacher. Can hardly wait to see how these “special needs” students assimilate in the real world — or will the world bend to them?

Thanks to Gay Marriage, Recognizing Mothers and Fathers Is ‘Unconstitutional’