SHTF PLAN — In today’s hypersensitive bizarro environment, where people are quite literally having mental breakdowns following the election of President Donald Trump, everything that used to be normal appears to now elicit howls of racism, xenophobia and sexism.

In the latest example we turn to Iowa, where students from Valley High School attended a basketball game in traditional red, white and blue attire they reportedly wear to big games. One would think that showing support for their team wearing the colors of the U.S. flag wouldn’t even raise an eyebrow, but you’d be wrong.

First, for some context, here is a picture of the offensive clothing worn by Valley High School fans at the game: 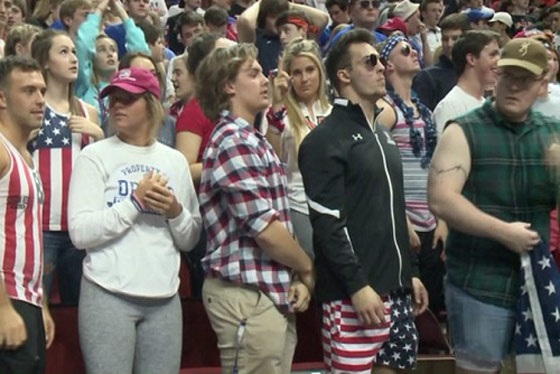 At first glance it certainly doesn’t look like these folks are engaging in any racist activity, but then, what do we know? […]

TYPICAL: Coca-Cola Requires a Valid ID to Attend Its Annual Shareholders Meeting But Disparages Georgia for Mandating an ID When Voting