Modern scholarship, under the control of the usual suspects, takes a skeptical approach to what is pejoratively called “moral panic.” Despite historical evidence that mysterious “Eyes Wide Shut”-type cults, Sabbatean Frankist and Hellfire Club-like activities have gone on in various forms for millennia, pajama people are fed a B.S. line that threats such as Pedogate and human sacrifices are largely a product of religious fanatics, conspiracy theorists and overly paranoid conservatives. The Lugenpresse, in typical fashion, simply declares such forces as “debunked.”

The narrative is that such cult-worshiping people don’t really exist. We would call this a “moral relativism panic”, not a moral panic. As you read through our series of sinister types going to the dark side throughout history, you will notice that they invoke spirits and strange gods through rituals again and again.

Winter Watch is setting forth to examine several of these social phenomenon over the ages, including witchcraft, Rome and Carthage. One such mindset is called bacchanalia. This generally means any uninhibited, drunken or orgiastic revelry. In art, the subject was popular from the Renaissance onward and usually included a large degree of nudity among depicted figures.

For example, Nicolas Poussin‘s “Bacchanal before a Statue of Pan” (1631) illustrates the statue of the horned Pan worship. By sheer coinkydink, small children are present. In the second image below, we see a Roman Bacchanal sarcophagus.

There is little to suggest that the Romans were strict prudes, and they probably did look the other way for a period. So what drove them to crack down on bacchanalia, or Bacchic cults?

Roman historian Livy gives an extended account of the bacchanalia. He had a deep mistrust of mystery religions and saw it as extreme Roman degeneracy and a threat to social order. It was also a secret society. Indeed, during its several years of utmost depravity, from 188 to 186 B.C., complete privacy was maintained and no magistrate intervened.

The usual suspects think Livy exaggerates, but there are numerous plays and comedies from that era that confirm his fundamental accounts. Livy on other topics of Roman history was quite sober and honest in his portrayals, warts and all. Few scholars question his other accounts, so why not this inconvenient truth?

Bacchanalia involved Roman festivals of Bacchus, the Greco-Roman god of wine, freedom, intoxication, fornication and ecstasy. They were based on the Greek Dionysia and  Dionysian mysteries, and probably arrived in Rome c. 200 B.C. via the Greek colonies in southern Italy and Etruria, Rome’s northern neighbor. Like all mystery cults, bacchanalia was held in strict privacy and initiates were bound to secrecy.

Livy states that a “Greek of humble origin, versed in sacrifices and soothsaying” had established a nocturnal version, added wine and feasting to the mix, and thus acquired an enthusiastic following of women and men. Women outnumbered men and ran the show. Women dressed as Bacchanites ran through the streets at night carrying torches.

Livy says that Campanian priestess Paculla Annia corrupted Rome’s unofficial but morally acceptable Bacchus cult by introducing the Etruscan version, with five, always-nocturnal cult meetings a month, open to all social classes, ages and sexes — starting with her own sons.

The new celebrations and initiations featured wine-fueled violence and violent sexual promiscuity, in which the screams of the abused were drowned out by the din of drums and cymbals. The initiation involved the brutal rape and sodomizing of both young men and women. According to the accounts, there was more abuse of boys than of girls. Per Livy,

There were more lustful practices among men with one another than among women.
If any of them were disinclined to endure abuse or reluctant to commit crime, they
were sacrificed as victims.

Those who resisted or betrayed the cult were frequently thrown into dark caverns and dispatched, while the perpetrators declared that they had been carried off by the gods.

Under cover of religion, priests and acolytes broke civil, moral and religious laws with impunity. Livy also claims that while the cult held particular appeal to those of uneducated and fickle mind (levitas animi) — such as the young, plebeians, women and “men most like women” — much of the city’s population was involved, and even Rome’s highest class was not immune. Commentators felt that the men who participated were behaving “like women” and were therefore unfit to serve in the army or government.

Young girls and youths were seduced, and all modesty was set aside. Every kind of vice found its full satisfaction. But crimes did not remain confined to these meetings. False witnesses, forgeries, false wills and denunciations proceeded from this focus of crime. Poisoning and assassination were carried on under the cover of the society.

In the year B.C. 186, the consuls Spurius Postumius Albinus and Q. Marcius Philippus conducted an investigation of the cult and reported to the Senate. One concern was that its own members were compromised in its frenzy. The report suggested the Bacchics would soon be in a position to seize control of the government. We have shown on these pages that such sinister people can and do come into power and exercise control. 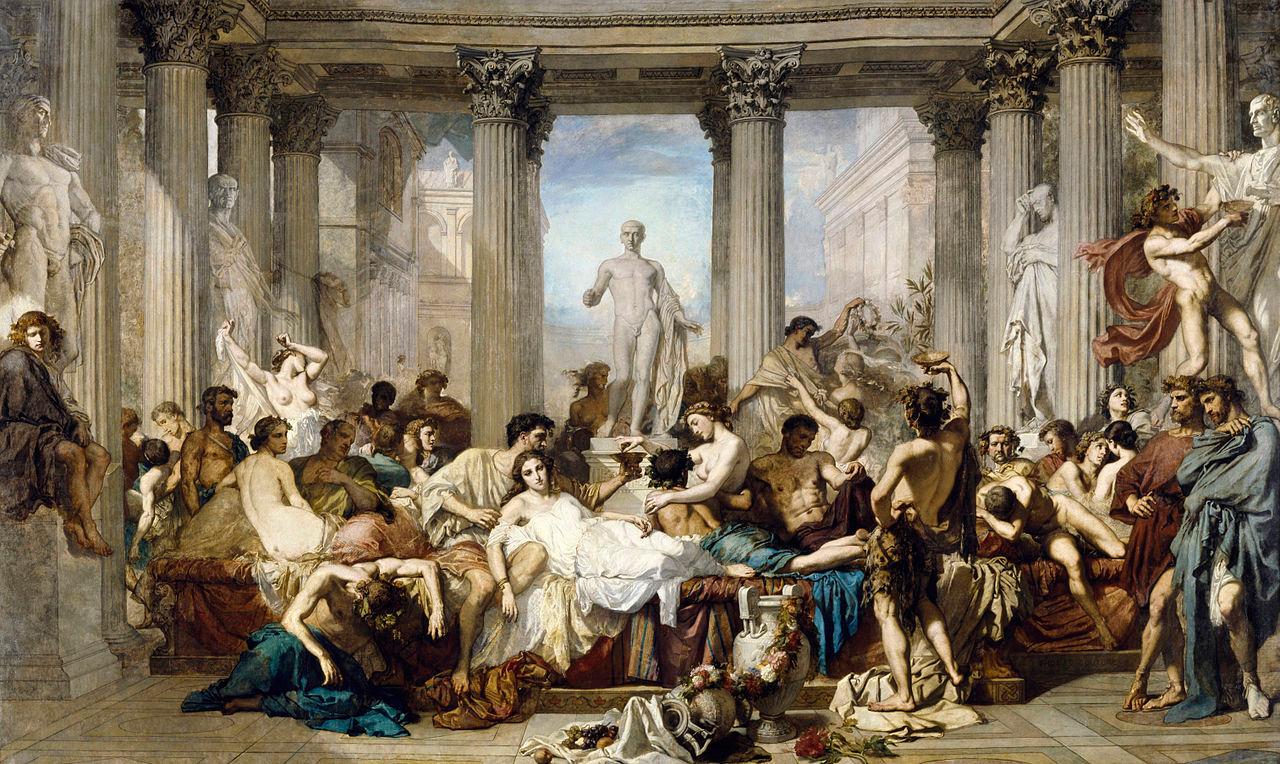 The shocked Roman Senate called a dire national emergency. Once investigations were complete, the Senate rewarded and protected informants and suppressed the cult “throughout Italy” — or rather, forced its reformation. In the course of the crackdown, about half the participants in the cult,  were arrested — and 7,000 persons were executed.

Some Things Never Change: What Caused the Moral Decline?

The annalist Lucius Piso attributed the new attitudes to the influences of depraved mystery religions from Manilus Volso’s army campaigning in Asia Minor. Livy himself attributed it to new foreign, luxurious, cultural materialism, including female lutists and harpists brought back from the east. Among the hierarchy, Livy points to the use of “boy slaves” (pederasty) as a serious moral problem. The now-ended Punic wars and campaigns throughout Italy had also increased the population of migrant newcomers with less of a stake in the blood and soil of Rome itself. This was referred to as the Etrurian influence.

Additionally, Carthaginian prisoners and slaves captured during the Punic wars introduced the Dionysus, or Bacchus cult, to Rome. As we reveal in tomorrow’s post, depraved Carthage had more influence than is generally recognized.

FAUCI EMAILS: Masks are ‘not really effective,’ advocated for school closures, knew virus could have been ‘engineered’

The Truth Revealed About the Deadly 1918 Spanish Flu: It Was Actually Bacterial Pneumonia

Salon Magazine: Church of Political Correctness About Everything