High ranking British Lieutenant-General Sir Frederick Morgan was responsible for post-war relief as the United Nations Relief and Recovery Agency’s (UNRRA) chief of operations. During WWII he had been deputy chief of staff in the Supreme Headquarters Allied Expeditionary Force (SHAEF).

Like U.S. Gen. George Patton, Morgan voiced his concern about abuses and corruption at the UNRRA and how funds and resources were being used. He stated in January 1946 that there was a secret Zionist organization that was attempting to facilitate an “exodus” of Jewish people from Europe to a new state in Palestine. For speaking out, Morgan’s position at the UNRRA in Germany was terminated.

Patton’s punishment for speaking out about various Zionist plots including the one Morgan addressed, we conclude, was his Dec. 21, 1945, death by assassination in Germany, which was staged to look like car accident. 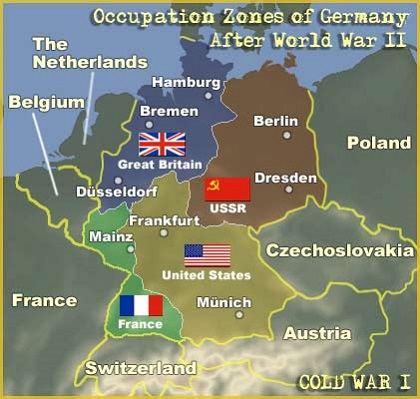 Morgan stated that he had witnessed an “exodus of Jews from Poland on Russian trains on a regular route from Lodz to Berlin. All of them were well dressed, well fed, healthy and had pockets bulging with money. All of them told the same monotonous story of threats, pogroms, and atrocities in Poland as a reason for their leaving.”

He said, “They certainly do not look like a persecuted people. I believe they have got a plan, a positive plan, to get out of Europe.”

These Jews from Poland and the Soviet East were pouring into West Germany from the East, passing “through” UNRRA-operated camps in the British and U.S. Occupation Zone. While there, many of these travelers, to prepare them for the invasion of Palestine, received paramilitary tactical training from uniformed, non-commissioned officers, many of whom were Haganah and Palmach operatives.

Gen. Morgan not only knew about the arming and training of “displaced persons” before traveling to Palestine (many forced), but he also knew – besides the abundance of U.S. Occupational Marks — that a great proportion of the $3.7 billion in UNRRA funds provided to the organization ($2.7 billion by the U.S.; $625 million by Britain; $135 million by Canada; other sources) was being used purely for a Zionist agenda.

Morgan was thoroughly smeared by the usual suspects in the captured media. Former U.K. Assistant Secretary of State for Public Affairs Archibald MacLeish stated that when the press had finished with Sir Frederick, “the sum total effect was a lie, a disastrous evil lie.”

UNRRA expected that Morgan would offer his resignation, but he did not do so. His attempt to clarify his concerns “off the record” failed. UNRRA Director and former New York City Fiorello La Guardia (half-Jewish) eliminated his position.

Expressing views that sounded much like Patton’s, Morgan later wrote of the UNRRA, “To serve such an outfit is degradation beyond description. In fact, to have been rejected for such service I have always felt to have been a high honour.”

It should be noted that Gen. Patton pushed for rapid repatriation of displaced people (DP) in his zone back to their country of origin and did not play along with the “exodus to Palestine” program. He was therefore also smeared and removed from his command post in September 1945 to clear the way for the next phase. But Patton didn’t shut up afterward either. He was subsequently murdered just before his return to the US and departure from the military in December, 1945 as the Zionist Palestine plot was in full swing.

Read “Patton Assassinated to Suppress His Criticism of Post-War Policy”

Following Patton’s removal, hundreds of thousands of refugees from Eastern Europe arrived in the DP camps. Many of these were returning Polish Jews who had initially been repatriated. In late 1945, the UNRRA conducted several surveys among Jewish refugees, asking them to list their preferred destination for emigration. Among one population of 19,000, nearly all (18,700) named Palestine as their first choice.

Evidence of the sources of the origins of the DP migration wave:

The incoming “displaced refugees” had an abundance of money that consisted almost entirely of a U.S.-occupation currency called “marks.” Interests in the Soviet Union had been given the U.S. printing plates by the US Treasury in 1944. Zionist mole and traitor Harry Dexter White (aka Weit), who we discussed in yesterday’s post played an instrumental role in this controversial decision. There was a critical congressional investigation in 1947 that explored this move.

Soviet defectors fingered White for committing espionage during his public tenure and provided evidence. In March 1945, Whittaker Chambers told the U.S. State Department that White had brought various members of the American Communist Party underground into the U.S. Treasury Department.

In November of ’45, defecting Soviet espionage courier Elizabeth Bentley told investigators of the FBI that White during the war (1942-1943) was photographing U.S. government documents and passing them on to her and NKVD spymaster Jacob Golos.

In 1948, White died of an “overdose of digitalis” after a heart attack following his testimony at a House Un-American Activities Committee.

So it was politically convenient that it wasn’t until 1953 that the U.S. Senate heard the testimony Bentley, who swore that White was responsible for arranging the Treasury plates for printing Allied military marks in occupied Germany to the Soviets, who thereupon printed currency with abandon, sparking a black market and serious inflation throughout the occupied country and costing the U.S. tax payers a quarter of a billion of dollars.

Bentley wrote in her 1951 autobiography that she had been “able through Harry Dexter White to arrange that the United States Treasury Department turn the actual printing plates over to the Soviets. Henry Dexter White under instructions from his Soviet handlers was instrumental in the decision.

So it wasn’t strictly espionage by White but more a captured agent lobbying for a foreign power, the Soviet Union. I am not sure what the difference is in the end, not much?

Although there was push back from the usual suspects, Bentley’s revelations would later be corroborated by a memorandum found in Soviet archives a half a century later. In the memorandum, Gaik Ovakimian, head of the American desk of the NKVD (for which Bentley worked), cites a report from New York (where Bentley was based) from April 14, 1944 (when Bentley was running the Silvermaster group), reporting that, “following our instructions” via Silvermaster, White had obtained “the positive decision of the Treasury Department to provide the Soviet side with the plates for engraving German occupation marks.”

Incredibly, the incorrigible White is revealed in the VENONA decrypts, described in a cable dated Nov. 20, 1944, of accepting a Soviet offer made to White’s wife through the Jewish spy Nathan Silvermaster to arrange help with their daughter’s college tuition.

So much for the back story narrative that treacherous Harry Dexter White was just a lone-wolf Soviet and Zionist rogue agent. This would point to White operating as point of the spear for U.S. Treasury Secretary Henry Morganthau himself on a number of traitorous acts. No wonder Harry White (aka Weit) at only age 55 needed to be disposed of via “overdose” in 1948.

What other secrets did White take to the grave?

He was involved with some very dicey, deep-state operations. As head of the Office of Monetary Research, White was able to appoint staff without the normal civil service regulations or background inquiries. He himself was also appointed assistant to Morgenthau in order to act as liaison between the Treasury and the State Department on all matters bearing on foreign relations.

White was also made responsible for the “management and operation of the Exchange Stabilization Fund,” which was not subject to any legislative oversight. These entities allowed White to loot and direct U.S. funds in all sorts of questionable covert areas, including to Zionists taking over in Palestine.

How Once A Torn Country Liberated Itself From Debt Slavery

3 Comments on Did US Treasury Secretary Morganthau Provide Currency Printing Plates to Soviets? And the Instrumental Role of Spy Harry White