The Podesta Wilileaks and Pizzagate revelations, the pedophilia case of former Speaker Dennis Hastert and the insertion of genitals into pig’s head ritual of David Cameron points to the certainty that compromised individuals are actively recruited into positions of power — particularly within the deep-state intelligence, law enforcement, judiciary and media. In the course of my research, I discovered that it goes far beyond just compromising enforcers and gatekeepers. Satanists and pedophile rapists are put into the control grid not just because they can be easily corrupted by the Crime Syndicate, but typically because they are completely lacking in any moral scruples. Par for the course, BBC reports that child abuse files on hundreds of U.K. cases were “accidentally deleted.”

The shocking and sordid story of Belgian child murderer, kidnapper and rapist Marc Dutroux provides a matrix or background of how this works. It makes the scenes depicted in the movie “Eyes Wide Shut” look tame by comparison.

As those who have tried to expose the deep state have learned, criminals are ruthless at quelling witnesses, whistle blowers and reporters, and have a large and organized “defense league” to do their bidding. In child abuse cases in particular, death squads are sent after a shocking number of people, as shown in the documentary below. In part, this is because child trafficking is a big and profitable business.

How did Dutroux and his handler, Michael Nihoul, manage to slip though Belgium’s justice system? I suspect they left a cache of evidence with a trusted custodian that could implicate powerful people in “sex slave” parties.

In fact, Nihoul bragged in a Der Speigel interview after being paroled:

“I control the government. … Everyone has compromising dossiers on one another, to be used as leverage in the right situation. … This is the Belgian disease. …

“Give me another 20,000 marks, and I give you a serving minister who is embroiled in a murder. … I know the killer and will have him contact the minister by telephone. You can listen along, okay?

“[Voice recorder turned off. For a 6-digit sum] I will give you a picture on which then Prince Albert jumps a 16-year-old girl. Naked. Shot at the second floor of the Mirano Club 20 years ago [where a pedophile blackmail ring allegedly was situated, according to other witnesses]. … Then I do have to leave Belgium.”

Without naming names, a British documentary gives the background about a network of high-level Belgian officials and businessmen who were involved in various forms of child abuse, including the rape and murder of children and young girls. To understand this affair, the video below will need to be viewed.

Shortly after Dutroux and Nihoul, kidnappers for this trafficking network, were arrested, the top investigator who broke this high-profile case was mysteriously removed and replaced with inexperienced sycophant. An enormous outcry followed in Belgium, peaking with a 350,000-person “white March” against the government. Elements within the government and elite were so seriously implicated in the crimes and cover up that Belgium came close to open insurrection in 1996. Documents also link to various Dutch officials as well.

The Institute for the Study of Globalization and Covert Politics (ISGP) offers a lengthy report about the Dutroux case as well as background about child rape, satanic ritual sacrifice, snuff films and other horrors. There is a nasty mix of pedophiles, satanists and organized crime involved in kidnapping and trafficking victims. In 2010, it resurfaced that the Catholic Church was involved in some manner when a huge trove of Dutroux docs and photos were discovered in the home of an archbishop. Many were court docs, some claiming the Leige Jewish Mafia was involved.

This is in no way some peculiar Belgium-only behavior. My primary interest in this case is in the science of cover ups, as I think this model may be incorporated in some of the mob-like charity frauds seen of late in the U.S., such as Sandy Hook; or in social-engineering hoaxes, such as the totally bogus Elliott Rodger shooting in Santa Barbara and lately the raft of racially charged agit-props. The Brussels (there’s Belgium again) Jewish museum shooting are also highly suspect.

Most people fail to understand the nature of and size of these criminal syndicate grid networks. The Belgian officials with influence involved in the investigation were actually named by abuse survivors as participants or were proto-pyschopathic underlings of the participants.

The Dutroux documentary is a first-hand account of truth suppression techniques. David Martin created a matrix of these methods called “13 Techniques for Truth Suppression,” which are list below. All of these were incorporated in the Belgian example.

Strong, credible allegations of high-level criminal activity can bring down a government. When the government lacks an effective, fact-based defense, other techniques must be employed. The success of these techniques depends heavily upon a cooperative, controlled press and a mere token opposition party.

When faced with an uprising in Belgium, the network or cabal finally employed technique No. 9 via a phony “investigation” followed by the all-too-familiar “incompetence” ploy. And it worked. The blame was laid at the foot of a police investigator, who just looks like a pedophile. After falling on the sword for his brethren, this officer, Rene Michaux, was promoted — much in the same manner that all the incompetents in the 9/11 inside job were also promoted.

In the following months and years details came out about the failure of the police and BOB to catch Dutroux in an earlier stage. Although usually not presented in such a way, most of these rather odd failures can be ascribed to BOB officer Rene Michaux.

As head of Operation Othello, a surveillance operation against Dutroux from August 10, 1995 to January 1996, he practically knew everything there was to know about this already convicted, violent pedophile. From all sides evidence was presented to him that Dutroux not only had kidnapped Julie and Melissa, but also An and Eefje. However, Michaux ignored evidence presented by such informants as Claude Thirault, to whom Dutroux had mentioned how to kidnap young girls and how much you could get for them; Dutroux’s mother, who had gathered evidence from her son’s neighbors that he was likely involved in the kidnappings; and police officer Christian Dubois, who early on was on the trail of the gang of Nihoul, which would immediately have led to Dutroux. 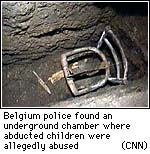 In between all these reports, the video cameras aimed at Dutroux’s Marcinelle home as part of Operation Othello failed to register Dutroux bringing in An and Eefje on Aug. 22, nor would Michaux’s team notice Eefje’s failed escape attempt on Aug. 25, in which she briefly climbed out the bathroom window to shout for help. An and Eefje were taken out of the house in September and murdered.

When finally forced to search Dutroux’s Marcinelle home for reasons not related to the kidnappings, Michaux decided to ignore the voices of two young girls, seemingly not even trying to get a response from them. He also didn’t think that Dutroux’s odd L-shaped basement, with one wall much newer than all the others, was reason enough to tear it down, nor did he recognize the significance of such items as vaginal cream, a speculum, chains and a videotape with the name of a program on it dealing with missing children. Two other videos which would have shown Dutroux working on his basement and of him raping a 14-year-old girl were returned to Dutroux’s wife, apparently without having been reviewed by his team.

This failure of properly searching Dutroux’s home apparently led to the death of Julie and Melissa, who are believed to have died from starvation in Dutroux’s basement. It also led to the kidnapping of Sabine and Laetitia after Dutroux got out of jail in March 1996.

In August 1996, after Dutroux had been arrested on suspicions that he had kidnapped Laetitia, Michaux led another three-hour search in Dutroux’s Marcinelle home, when Sabine and Laetitia were located. Needless to say, Michaux not only failed to find the girls, he also hadn’t noticed the letters Sabine had hidden under Dutroux’s carpet. Luckily, the location of the girls would be pointed out by Dutroux 48 hours later, after it had become clear to him there was no way out this time, especially not with his lackey Michel Lelievre spilling the beans.

These failures of Michaux led to strong criticism from the parents of An Marchal, who went to inspect Dutroux’s basement themselves. The parents of Melissa Russo filed an official complaint against him. When Bourlet criticized Michaux in 2004 over his failure to even find Sabine’s letters, and seemingly implied this might not have been unintentional, Michaux could only react by calling Bourlet a “liar” and stating that “he sure wouldn’t have found Laetitia under the carpet.” These intellectual replies were soon followed by threats to sue for libel. Michaux’s extreme incompetence was rewarded with a new position as a local police commissioner.

What Did Elliott Abrams Have to Do With the El Mozote Massacre?