On Oct. 18, the hacker group Anonymous supposedly put out a rather wild-sounding video and leaked a seven-page political-consulting document commissioned by the Clinton Foundation. The comprehensive presidential election polling report, titled “Salvage Program,” appears to be a product of Benenson Strategy Group, which describes itself as a “strategic research consultancy that marries language expertise with innovative research to frame choices so that your brand is the only answer.” Group founder (((Joel Benenson))) is “currently the chief strategist for Hillary Clinton’s 2016 presidential campaign.” The document was made available through the website BeforeItsNews.com, and its story is now gaining traction among alt media.

BeforeItsNews has a dubious track record, and I will say up front that it seems to be a reverse psy-op designed to make those who accept it at face value look foolish and lose credibility. In other-words, it may be an attempt to make “conspiracy theorists” (CT) like us as well as Trump supporters look gullible and stupid. No source should be fully trusted as it is an absolute fact that the population is gamed and manipulated mercilessly by the Crime Syndicate. Anything is possible.

While recognizing that over time many CTs are being proven right, TNN tries to surf challenging waters, but avoid the dangerous ones. That said, readers can adjust their awareness levels should some of the psychological operations mentioned in this document materialize around and after Election Day. But for fun, as a learning process and protection from ridicule, here is the analysis of what I feel is likely an elaborate hoax.

On the flip side of the coin, there are some elements to this document that are plausible and interesting, such as this internal polling item that reveals a truism:

On a disturbing note, some 70% of Republican-leaning voters are aware of bused-in voting, false-face operations, and dead-man’s-party registration drives. This may necessitate severe strategy changes for November.

The document begins its executive overview with the following statement. Comparable photos of recent campaign rallies provide anecdotal support. There is enthusiasm as a half-truth: however, the 97% of GOP identified as enthusiastic seems counter-intuitive and a real stretch (aka Big Lie). Here, I check hoax box.

At this point Donald Trump has both momentum and enthusiasm. Distrust in the mainstream media is blunting the impact of the collective polling narrative. As Election Day approaches, Hillary Clinton’s favorable ratings have crashed to historic lows (12%) in non-partisans and Donald Trump is consolidating support (97% of LV Republican-identifying respondents are either enthusiastic or very enthusiastic about voting for Trump).

Under findings, we see a mix of reasonable outcomes mixed with absurdity, which signals dirty tricks. In Question 14, Clinton leaners were asked about her health. Verdict: “Not sure” would intuitively score a much higher response than 4%. And “anti-social personality disorder” is not a health issue or ailment that explains Hillary’s trances and seems a nonsensical choice to put in a “unbiased” partisan questionnaire. I could be wrong, but I think Hillary supporters are still brainwashed enough that much more than 21% would call her healthy.

Question 18 to hardcore Trump supporters comes up with asinine answers. The first two are reasoned, but then it suddenly switches to bizarre with the election supervisor choices. Verdict: A hoax so bad that it makes me suspect Clinton dirty trick here. Succession? This is John Oliver-style psyops.

Next, pollsters ask what would stop respondents from voting [see page 4]. The answers are downright nonsensical and quite funny in a perverse way. Nothing: Trump 74%, Hillary 0%. Verdict: A LMAO hoax.

The next one is just hilarious.

Q21 to Hard Trump support voting none on previous question: What events could stop you from voting?
Shooting war in neighborhood: 8%
External invading force: 17%
Attack by extraterrestrials: 38%
Biblical event: 16%
None: 17%
Not sure/other: 4%

Now come the “recommendations.” First are the ones they rejected. Frankly, I wouldn’t put some of these past them. There is sophistication and conspiracy insight in the writing that points to a high-intelligence hoaxster. The verbosity feels chutzpah-inspired, as does the mocking. Good one, Sholomo! Alternatively, it could even be a modern, masterful version of a “Protocols of Zion” like forgery. Verdict: More is going on here than just Onion-style satire. The Anonymous name is diluted. It can and does get used by any psyops that comes down the pike.

The Salvage Program recommendation ties into Q21 and wraps this up as quite as a April Fool joke. It doesn’t hurt that Wikileaks emails were rife with ET references either. Except April is six months away. I personally love the reference to hologram experiments “in the Levant.” TNN wrote a major article about this synthetic reality. Do they conduct these on Arabs and Palestinians? You can bet your bottom dollar, and worse. But in this psyops hoax, this term is designed to mock you and reinforce their “nothing to see here move along” message. I call this the slip-in, something to be aware of in their gaming and manipulations. 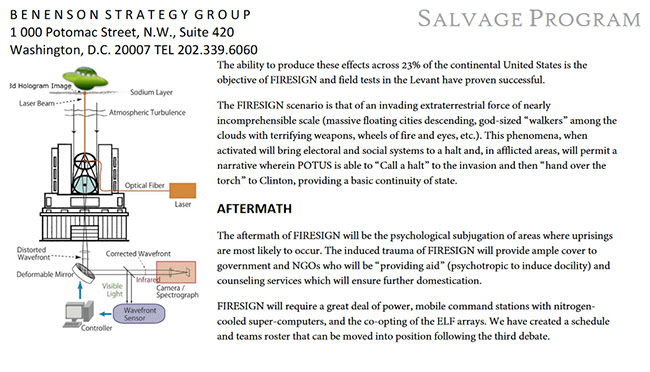