Has our October surprise come early? Officials announced the death of U.S. Supreme Court Justice Ruth Bader Ginsburg on Friday evening. (Are they sure she’s not just napping?)

Russ’ Take: She’s hasn’t been seen since February. Was she put in a morgue cooler earlier this year? The timing of her death on the Jewish new year (rosh hashanah) goes toward contributing to even more chaos and crisis. It’s sketchy at best. What’s in the script now?

With the announcement, the Lugenpresse disclosed Ginsburg’s dying wish: Do not fill her SCOTUS seat until there’s a new president in office.

One day later, (it had appeared that) Trump had sent to the Senate his choice for her replacement: Barbara Lagoa from the election battleground state of Florida. Lagoa is a Trump-nominated member of the U.S. Court of Appeals for the 11th Circuit, vetted in October 2019.

Lagoa’s also the 52-year-old daughter of migrants who fled Castro’s Cuba. At cursory glance, it appears that — unlike Ginsburg — she’s probably not Jewish nor a cultural Marxist.

UPDATE: Sunday afternoon, I learned that Trump’s nomination of Lagoa for SCOTUS is not certain after all. The Lugenpresse universally are reporting that she is one of a few women Trump is considering for the post.

According to Fox News, aside from Lagoa, the other top contender is Amy Coney Barrett from New Orleans. Trump appointed Barrett to the bench of the Seventh Circuit U.S. Court of Appeals in 2017. Revolver offers a good cursory review and analysis of Barrett’s strengths and weaknesses.

Trump will make his decision “next week,” Fox reports. 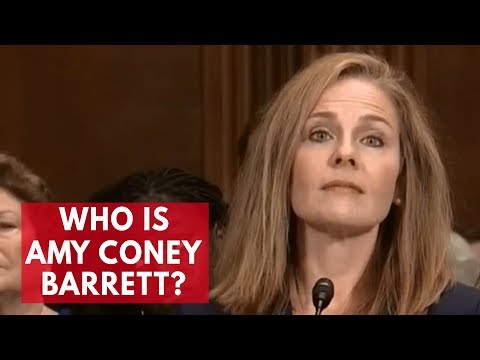 I discovered the news of Lagoa’s nomination late last night while reading her Wiki bio. After doing a double take on the news in the third paragraph of her Wiki intro, I confirmed it with a few other common news sources. But on Sunday afternoon, I discovered the news was reporting the nomination was not decided. Her intro on Wiki page has since been scrubbed from a couple paragraphs down to one sentence, and the mention of her in relation to SCOTUS is now much further down the page. I see no news corrections.

Both Democrats and Republicans claim their opponent is going to pull shenanigans to steal the election.

Republicans claim Democrat states are essentially using the scamdemic as an excuse to deploy helicopter ballots (like “helicopter money”) across Democrat-controlled communities in order to stuff postal service mailboxes with fraudulent votes.

Democrats claim Republicans are going to try to suppress votes by deliberately slowing down the operations of the U.S. Postal Service.

Questions still remain as to how long precincts will be allowed to accept mail-in ballots. Is extra time really needed — or even legally allowed? How many more provisions of our constitutional democracy will be tossed aside in the age of Covid?

Trump added fuel to the fire in July when he told Fox News he might not step down should he lose the election.

Donald Trump refused to give a clear answer on whether he would accept this year’s presidential election results in an exclusive wide-ranging interview with Fox News, which aired Sunday.

Fox News Sunday host Chris Wallace pressed Trump to “give a direct answer” on whether he would accept the Nov. 3 election results or not.

Hillary Clinton in an interview last month said Biden should not concede the 2020 presidential election regardless of the outcome, and it wasn’t the first time she’s made such a statement.

“Joe Biden should not concede under any circumstances, because I think this is going to drag out, and eventually I do believe he will win if we don’t give an inch, and if we are as focused and relentless as the other side is,” Clinton said in an interview with her former communications director Jennifer Palmieri for Showtime’s “The Circus,” which released a clip Tuesday.

Here’s a lesser-known fun fact: Hillary has been advising Harris on her campaign since late last year — maybe longer. And Harris’ sister, Maya Harris, was Hillary’s senior adviser for her 2016 campaign. Cozy, isn’t it?

So there’s more than a fair chance that SCOTUS will have to weigh in on the 2020 election. This happened in the Bush-Gore election of 2000. Remember the hanging chads in Florida?

If eight SCOTUS justices (rather than nine) are called upon to decide the 2020 election and the decision is deadlocked, then what? A do over? Or is it possibly treated as a contingent election?

A contingent election happens when the electoral count and popular vote is non-conclusive for some reason. In such a case, the U.S. House of Representatives (currently Democrat-controlled) steps in to decide who becomes president, and the U.S. Senate chooses the vice president. Until such decisions are made, the current vice president becomes the acting president. This is my non-legal amateur interpretation of a possible scenario, for whatever it’s worth.

UPDATE: On Sunday, Democrat House Majority Speaker Nancy Pelosi of California said she will not rule out impeaching Trump and U.S. Attorney Gen. William Barr if the U.S. Senate tries to appoint Trump’s nominee to the bench during the lame duck session.

If the Senate fails to appoint Lagoa and Biden wins the election, Biden plans choose the next SCOTUS justice from his list of black women, a list he said he would provide prior to the election but has yet to reveal. Given his choice of Kamala Harris as his veep, expectations are low.

Now, I know it seems kind of harsh to dance on the old yenta’s grave before she’s even reached room temperature, but for far too long Ginsburg has been a malevolent force driving much of what is wrong in the United States today, and a political hack to boot.

In her 27 years on the bench since Bill Clinton appointed her in 1993, this New York judge developed a long track record of standing against constitutional liberties and Christian values while being a champion for homosexual movements.

Ginsburg believed that a Christian conservative wedding cake designer in Colorado should not be allowed to decline an order for a homosexual civil union.

She believed only militias should be allowed to have guns.

She believed the Boy Scouts of America should not be allowed to deny membership, including troop leader positions, to homosexual adult men.

Read “The Discordian Pederast Destruction of the Boy Scouts of America”

She held that students should not be allowed to pray during school football games, and that religious schools, such as Catholic schools, must be prevented from receiving public funding.

And she supported no restrictions on abortions, including controversial partial-birth abortions.

She believed that people should be allowed to rally and picket at funerals without fear of being sued by the deceased’s family for emotional distress.

She held that corporations and labor unions should be allowed to give unlimited political donations to candidates, but an individual’s contributions should be limited.

She believed that employees should be forced to pay union dues even if they don’t want to be members.

She did not believe individuals should have the right to grow marijuana at home for personal medicinal purposes.

And she held that religious symbols should not be allowed on public lands, such as Christmas trees in government buildings and holy crosses at war memorial cemeteries. She felt it violates separation of church and state.

Though Ginsburg is (probably) gone, her proxy remains: one Justice Kagan, a mediocre Obama appointee whose decisions have been in lock step with Ginsburg’s since taking the bench. Be sure to check out Russ Winter’s article on Kagan.

'The Report From Iron Mountain': Revelation of the Method for Warmongering and Tyranny or a Satirical Tome? https://www.winterwatch.net/2020/10/the-report-from-iron-mountain-revelation-of-the-method-for-warmongering-and-tyranny-or-a-satirical-tome/