Assuming he could survive a brutal 2020 election campaign, “Creepy Joe” Biden would be 78 years old when sworn into office. But of late, it appears ol’ Joe is spiraling out of control with a series of campaign-trail gaffes and blunders, which are being dubbed “Joe bombs.” Dementia and the presidency or a candidacy should be given a wide berth.

Surely someone in the Democrat Party must’ve had the “retirement talk” with ol’ Creepy. Barack Obama perhaps? If not, then Winter Watch can only assume a Biden ticket would be yet another attempt to ensure the takedown with malice of the United States.

Can you just envision what a “Red Queen” Trump-“Creepy Joe” Biden presidential race would look like to the world? America would be a laughing stock. Is that the idea?

Joe’s campaign motto is “No Malarkey.” For those under the age of 50 who’ve likely never heard such a word, “malarkey” is defined as insincere or foolish talk or bunk.

Let’s lead off with Joe Biden’s encounter with an Iowa voter. The voter, who Creepy addresses as “Fats,” lobbed an issue that Biden must surely address at some point: his son Hunter’s involvement in the corrupt Ukrainian “energy” firm Burisma Holdings.

The voter didn’t understand how Hunter Biden got a $50,000 a month salary for sitting on the board of a foreign company involved in an industry in which Hunter knows nothing and located within a country about which he knows nothing. This was five years ago, when Ukraine was warring with Russia on her eastern boarder, and Biden was Obama’s go-to guy for the region. Only the worst sort of pajama person wouldn’t be even remotely suspicious.

So the man in the audience asks a legitimate question about what his son was doing at Burisma, and Biden calls him a “damn liar!” and retorts, “Look, Fat, here’s the deal …” And when the man, who’s an 83-year-old Marine Corps veteran, questions whether he’s old to run, Biden challenges him to a push up competition and an I.Q. test. It will be a long year ahead if this is the best Biden can muster.

This follows on another bizarre spectacle in which Creepy Joe rambles about his hairy legs follicles in the swimming pool and his love of little kids sitting on his lap. This is not presidential behavior.

The Los Angeles Times wrote, “Most candidates give the same stump speech over and over, putting reporters, if not the audience, to sleep. But during any Biden speech, there might be a dozen moments to make press handlers cringe, and prompt reporters to turn to each other with amusement and confusion.”

TIME magazine wrote that Biden often goes too far, and that “along with the familiar Washington mix of neediness and overconfidence, Biden’s brain is wired for more than the usual amount of goofiness.”

Biden got in trouble a decade ago for gaffes that seem mild in comparison to now. On the topic of Obama’s potential presidency, Biden said, “I mean, you got the first mainstream African-American who is articulate and bright and clean and a nice-looking guy, I mean, that’s a storybook, man.”

This mild comment undermined his campaign as soon as it began, significantly damaged his fund-raising capabilities and later took second place on TIME magazine’s list of “Top 10 Campaign Gaffes for 2007.”

Biden had earlier been criticized in July 2006 for a remark he made about his support among Indian Americans.

“I’ve had a great relationship,” Biden said. “In Delaware, the largest growth in population is Indian-Americans moving from India. You cannot go to a 7-Eleven or a Dunkin’ Donuts unless you have a slight Indian accent. I’m not joking.”

Seriously, this gaffe is sort of funny, especially in comparison to calling a voter a fat liar when presented with a question that’s not a soft-toss.

In 2015, in a series of swearing-in ceremonies and other events, Biden was called out for repeatedly coming up behind women and girls and touching them and sometimes whispering in their ear. Notice he zeros in on the young girls, positions them next to him and puts his hands on them.

An example of this behavior can be seen in the following video. He mostly ignores the teen boys and didn’t even say “hello” to one. He can be heard advising several to guard sisters from all the devious boys that come around. What a strange filter, which probably explains a lot toward why Biden would be a great tool for the Crime Syndicate kompromat.

He hasn’t let up. In March 2019, former Nevada assemblywoman Lucy Flores alleged that Biden kissed her without her consent at a 2014 campaign rally in Las Vegas. In a New York magazine op-ed for “The Cut,” Flores wrote that Biden had walked up behind her, put his hands on her shoulders, smelled her hair and kissed the back of her head. Adding that the way he touched her was “an intimate way reserved for close friends, family or romantic partners – and I felt powerless to do anything about it.”

In an interview with HuffPost, Flores stated she believed Biden’s behavior to be disqualifying for a 2020 presidential run.

Two days after Flores, Amy Lappos, a former congressional aide to Jim Himes, said Biden crossed a line of decency and respect when he touched her in a non-sexual but inappropriate way by holding her head to rub noses with her at a political fundraiser in Greenwich in 2009.

The next day, two additional women came forward with allegations of inappropriate conduct. One woman said that Biden placed his hand on her thigh, and the other said he ran his hand from her shoulder down her back.

By early April 2019, a total of seven women had made allegations of inappropriate physical contact by Biden. We are surprised it is that few, as he is shown doing variations of these on film continually. If he stays in the campaign, the dirt diggers will be revealing much more foolish behavior.

Here is Biden moving in on Obama’s space while sitting down — odd positioning and posturing to take with the POTUS.

Biden has always been prone to exaggeration. Can you imagine what sort malarkey “Dementia Joe” will be likely to spout?

A video released in 2008 showed that when earlier questioned by a New Hampshire resident about his grades in law school, he had stated that he had graduated in the “top half” of his class, that he had attended law school on a full scholarship and that he had received three degrees in college, each of which was untrue or exaggerations of his actual record. 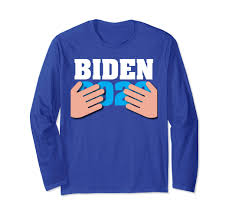 Advisers and reporters have also pointed out that he falsely claimed to have marched in the Civil Rights Movement.

Journalist James Traub wrote that “Biden’s vanity and his regard for his own gifts seem considerable even by the rarefied standards of the U.S. Senate.”

Separate from his comportment and corruption, Joe Biden has politically supported every neocon, neoliberal and kakistocratic loot that has come down the pike. And now he, like Trump, seems bent on playing a Trojan horse role in the shameful and embarrassing takedown of America. And he’s still solidly ahead in Democrat polls.