There are major advantages to natural breast feeding; however, par for the course, major corporations looking to make a quick buck launch commercial campaigns to refute thousands of years of evolutionary mammalian development. But don’t take our word for it.

Research programs have documented how the failure of “mother love” in infant monkeys adversely affect the biological development of the brains. Mother-infant separation resulted in astonishingly abnormal brain changes that underlie behaviors of depression, impulse dyscontrol and violence, according to James W. Prescott, Ph.D., a health scientist administrator at the National Institute of Child Health and Human Development (NICHD) from 1966 to 1980, and created and directed its Developmental Behavioral Biology Program.

Prescott’s research revealed that breastfeeding for 2.5 years, or longer, was essential to optimize brain and behavioral development for the prevention of depression and suicide, and makes peaceful, harmonious and egalitarian behaviors later in life possible. Baby-carrying bonding was found to predict with 80% accuracy the peaceful and violent behaviors (“killing, torturing, mutilation of enemy captured in warfare”) in 49 tribal cultures distributed throughout the world.

Without breast feeding, babies don’t get the benefit of passive immunity normally passed through mothers’ milk. Lowered immune response and water-borne disease mean powdered-formula-fed babies are at greater risk of contracting serious illnesses. This is especially true in third-world countries, where many people don’t have access to a clean water supply to mix powdered formula and poverty-stricken mothers may feel tempted to overly dilute the mixture to make it last longer.

Waterborne diseases fed straight the systems of immune deficient babies cause what are now common conditions in many parts of the world: diarrhea, vomiting, respiratory infections, malnutrition, dehydration and even death. These outcomes are commonly known as bottle-baby disease.

As if baby formula isn’t bad enough, it can also be rather easily counterfeited with inferior additives resulting in another widespread problem.

Breast milk is an organ. It’s basically the immune system of a baby. It’s how the intestines grow properly, it’s how the baby’s immune system grows properly, and it’s an overlying blanket of protection for that baby against microbes, doctors say. In fact, molecules in breast milk have nuked cancer on the spot, and oncology is now taking advantage of that. There are molecules in break milk that kill certain kinds of bacteria that have capsules on the outside like pneumococcus, which is another thing that we vaccinate for.

Another miraculous thing about mother’s milk is that normally when there’s killing of a microbe, there’s massive inflammation associated. But, in the presence of breast milk, there’s almost no inflammation because of anti-inflammatory molecules. So you have this miraculous organ that’s transferring over hundreds of thousands of T-cells and stem cells to help that baby grow and repair anything that went wrong. You also have genetic material that can intersperse in that baby’s own genetic material and cure genetic diseases. 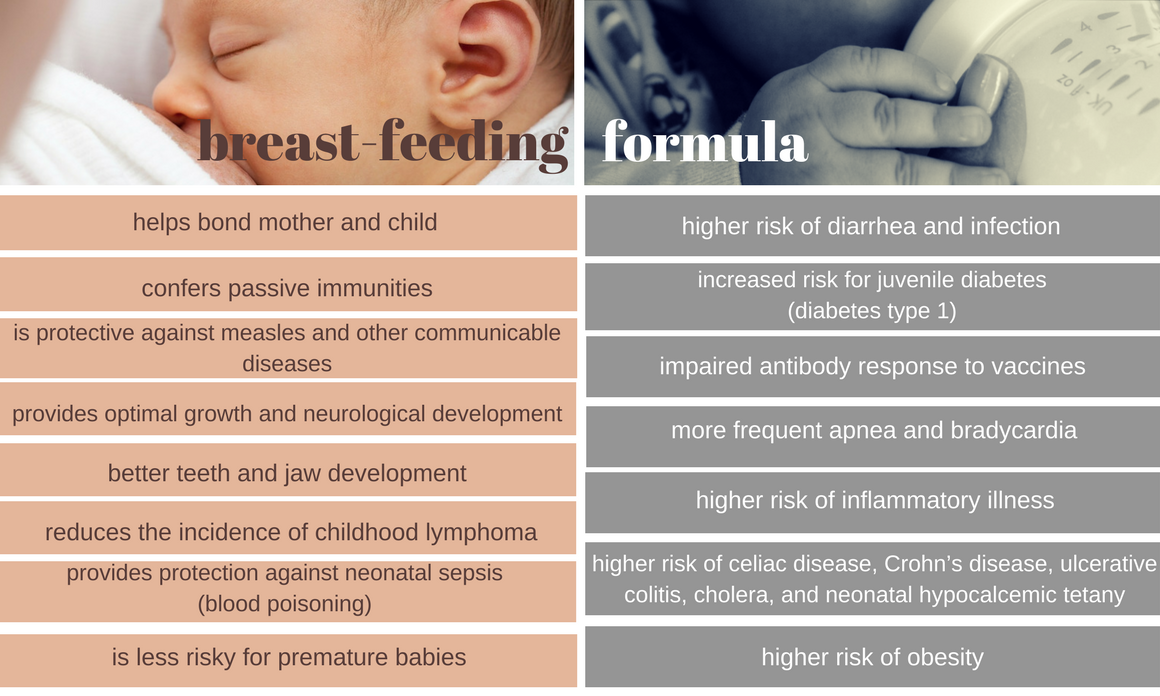 Modern formulas are only superficially similar to breast milk, Jack Newman, MD, FRCPC says. Every correction of a deficiency in formulas is advertised as a new and improved product advance. Fundamentally, formulas are inexact copies based on outdated and incomplete knowledge of what breast milk is. Formulas contain no antibodies, no living cells, no enzymes, no hormones. Its contains much more aluminum, manganese, cadmium, lead and iron than breast milk. It contains significantly more protein than breast milk. The proteins and fats are fundamentally different from those in breast milk. Formulas do not vary from the beginning of the feeding cycle to the end as breast milk does.

In the first six months of life, bottle-fed babies are six to 10 times more likely to develop necrotising enterocolitis – a serious infection of the intestine, with intestinal tissue death – a figure that increases to 30 times the risk after that time.

Even more serious diseases are also linked with bottle feeding. Compared with infants who are fully breast fed even for only three to four months, a baby drinking artificial milk from early infancy is twice as likely to develop juvenile-onset insulin-dependent (Type 1) diabetes. Those breast fed six months or less has a five- to eight-fold risk of developing lymphoma before the age of 15.

In studies of children, it has been shown that those who were bottle fed as babies have a greater tendency toward developing debilitating health conditions, such as childhood inflammatory bowel disease, multiple sclerosis, dental malocclusion, coronary heart disease, diabetes, hyperactivity, autoimmune thyroid disease and coeliac disease.

And breastfeeding protects a child for up to 10 years against Haemophilus influenzae Type B (Hib) infections. For each week of breastfeeding the mother provides, the protection improved [J Epidemiol 1997;26: 443-50 quoted in Annals of Allergy, Asthma & Immunol 1998, Dec. Volume 81 on page 530].

Swiss transnational food and drink company Nestlé holds about 50% of the world’s breast-milk substitute market. The company is currently being boycotted for its continued breaches of the 1981 WHO Code that regulates the marketing of breast milk substitutes. It is a $11.5 billion market.

Nestlé encourages bottle feeding by either giving away free samples of baby milk to hospitals or by neglecting to collect payments. It has been criticized for misinforming mothers and health workers in promotional literature. Nestlé promoted the idea that malnourished mothers and mothers of twins and premature babies are unable to breastfeed.

Outrage toward Nestlé started in the 1970s, when the company was accused of getting third-world mothers hooked on formula, which is less healthy and more expensive than breast milk.

Poor women longed to move from a rural to an urban way of life, which prodded them to abandon breastfeeding and, in turn, primed them for marketing, according to the book “War on Want.” Companies hired “‘sales girls in nurses’ uniforms (sometimes qualified, sometimes not)” to drop by their homes unannounced and sell them on baby formula. Hospitals received freebies like formula and baby bottles. “The most insidious of these is a free architectural service to hospitals, which are building or renovating facilities for newborn care,” the authors wrote.

Somewhere along the line, the journal “Pediatrics” preached the circular logic that everyone should stop calling breastfeeding “natural” because it may cause people to believe that natural is better and this would undermine public health objectives regarding vaccination (which is not natural). Here is a quote from the article:

Gabrielle Palmer in “Politics of Breastfeeding” wrote that industrialized society is closely bound up with perceptions of sexuality. The very reason breastfeeding is frowned upon in public is that breasts are perceived exclusively as objects of sexual attention. Palmer wrote, “The extremity of this attitude was brought home to me when a male friend, responding to my statement that I could not see any good reason for women not to allow their breasts to show, stated, ‘After all, men did not walk about with their penises hanging out.'”