When the Panic of 1837 allowed John Jacob Astor (following the Parasite Guild model) to take over what was then City Bank of New York (Citibank), he named Moses Taylor as director.

The New York Times noted on May 24, 1882, that Moses Taylor (1806-1882) was chairman of the Loan Committee of the Associated Banks of New York City in 1861. Entrusted to him was $200 million worth of securities. It’s probably due to him more than any other one man that the U.S. government in 1861 found itself with the means to prosecute the Civil War.

Taylor was also one of the original investors in the New York, Newfoundland and London Telegraph Co., founded in 1854 by Cyrus West Field, who is credited with laying the first transatlantic cable.

He also had controlling interest in two of the largest seven gas companies in Manhattan that were merged (after his death) to form the Consolidated Gas Company in 1884, eventually becoming Consolidated Edison.

In 1812, the National City Bank began business as City Bank, later known as Citibank, in the exact same location as the first U.S. central bank and then defunct Bank of the United States, whose charter had expired. It represented many of the same stockholders. The most famous name associated with City Bank was Moses Taylor.

Taylor’s father had been a confidential agent employed in buying property for J.J. Astor’s interests while concealing the fact that Astor was the purchaser. Through this tactic, Astor succeeded in buying many farms and a great deal of potentially valuable real estate in Manhattan. Although Astor’s capital was reputed to come from fur trading, a number of sources indicate that he also represented foreign interests – primarily the Rothschilds.

A prior Winter Watch article on Astor (1763-1848) identified him as a leading Freemason, British intel operative and made man. He enjoyed an astonishing rise to great wealth and, at every turn, seemed to be backed by “friendly forces” in advantageous places. This despite the fact he had zero personal charisma, had some difficulty speaking English and had a heavy German accent.

In exchange for providing intelligence, manipulations, and influence to the British, Astor was given a percentage of the British opium trade with China.

With his father’s connection with the Astors, young Moses Taylor had no difficulty in finding a place as an apprentice in a banking house at the age of 15. Like so many others covered on the pages of Winter Watch, Taylor found his greatest opportunities when many other Americans were going bankrupt due to an “abrupt contraction of credit” — or what we have dubbed “parasite guild looting operations”

During the Panic of 1837, when more than half the business firms in New York failed, Taylor doubled his fortune via insider information and manipulation. Mysterious (City of London) liquidity was made readily available to Taylor at a time when others were choked off.

In 1855, he became president of City Bank. During the Panic of 1857, City Bank once again profited mightily by the failure of many of its competitors.

Like George Peabody and Junius Morgan, Taylor seemed to have an ample supply of cash for buying up distressed stocks. He purchased nearly all the stock of Delaware Lackawanna Railroad for $5 a share. Seven years later, it was selling for $240 a share. Moses Taylor was now worth $50 million.

Another notable parasite guildist during the ’37 Panic was Rothschild agent August Belmont (aka Issac Schoenberg). 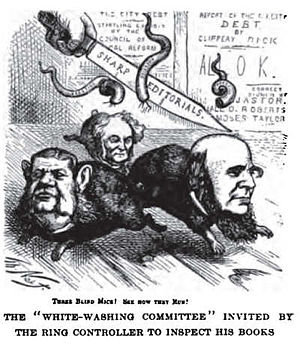 In August 1861, Taylor was named chairman of the loan committee to finance the Union Government in the Civil War. The committee shocked Lincoln by offering the government $5 million at 12 percent interest to finance the war. Lincoln refused and financed the war by issuing the famous “greenbacks” through the U.S. Treasury, which were backed by gold.

Taylor continued to increase his fortune throughout the war and, in his later years, the youthful James Stillman became his protege. In 1882, when Taylor died, he left $70 million.

Taylor’s son-in-law, Percy Pyne, succeeded him as president of City Bank, which had now become National City Bank. Pyne, however, was barely able to function at the bank. For nine years, the bank stagnated, nearly all of its capital held in Taylor’s own estate.

With this key asset sitting at dirt-cheap prices, a new family of made men and parasite guildists were coming onto the scene. One William Rockefeller, brother of John D. Rockefeller, bought into the bank. He persuaded Pyne to step aside in 1891 in favor of their agent the aforementioned James Stillman. Once Stillman was installed, suddenly National City Bank became the principal repository of the Rockefeller oil income and wealth. Illustrating the familial ties of these Crime Syndicate families, William Rockefeller’s son, William, married James Stillman’s daughter, Isabel.

City Bank in particular pioneered what is referred to as “relationship lending,” which is doublespeak for favoring (aka favoritism and nepotism) other made-men and cronies. Or as George Carlin said, “It’s a club- and you ain’t in it.”

By 1904, more than 1,800 companies had been consolidated into 93 corporations, a financial consolidation led by J. Pierpont Morgan and Rockefeller interests.

Like so many others in New York banking, James Stillman also had a British connection. His father, Don Carlos Stillman, had come to Brownsville, Texas, as a British agent and blockade runner during the Civil War. Through his banking connections in New York, Don Carlos had been able to find a place for his son as apprentice in a banking house.

Bear in mind that the operating model and success of these creations was more about being liquid and solvent during regularly crafted panics than about speculation, Ponzi units, wildcat finance and aggressive late-cycle lending. In fact, it was these institutions that would reign in credit, or start rumors to blow up the excesses and trigger panics.

Those betting on a friendly Federal Reserve to keep the party going in today’s massive bubbles should keep this practice in mind.

As lenders of last resort, they could then dictate terms and conditions. Case in point is hack Janet Yellen warning in late 2018 about extended credit conditions AFTER she masterminded and implemented several years of ZIRP (zero interest rate policy) and hyper-easy money.

“George Cortelyou, President McKinley’s Assassination and the Panic of 1907”