It’s been well publicized that the Houston Public Library in Texas hosted two registered sex offenders for Drag Queen Story Hour. Soon after, a Texas library in Austin did the same. It was later revealed that Austin Public Library, as a matter of policy, does not conduct background checks on its guest performers for children’s programs, according to a January 2019 resolution passed by the city’s LGBTQ Quality of Life Advisory Commission.

Anyone who works with children — whether nurses, teachers, librarians, coaches or bus drivers -should go through a screening process. Prior to interacting with children, they should pass an FBI background check, fingerprint check, drug screening and child abuse training. But apparently there are no rules for adult men who want to read books to children about so-called diversity — provided that man is in a garish drag costume.

A recent poll conducted by Sonia Poulton found that 88% of respondents were opposed to Drag Queen Story Hour. The vast majority of Americans felt the very idea of drag queens reading to children in public libraries falls somewhere on the spectrum between morally repugnant and absurd.

Infestation and Capture of the American Library Association

The American Library Association (ALA) was founded in 1876 to promote public literacy. It has around 57,000 dues-paying members. People who could not afford books or formal schooling could educate themselves for free via their local library. It liberated knowledge in much the same way the Internet does today.

Enter Israel David Fishman (1938– 2006), the founder of the Task Force on Gay Liberation. His father was an ordained rabbi. At the age of 8, Fishman entered Yeshiva Torah Vodaath in Williamsburg, New York. At age 15, he was hospitalized and treated with electric shock therapy. He struggled with mental illness that he attributed to child abuse and incest throughout his life. Regardless, he was still a highly functioning activist and instrumental in establishing a homosexual agenda within libraries and among the hiring of librarians.

In May 1966, Fishman received a master’s degree in library science from Columbia. In 1970, he became the circulation librarian at Upsala College in East Orange, New Jersey. That same year, he attended an ALA meeting in Detroit and conceived the idea of a homosexual “liberation” group within the library profession.

Thereafter, Fishman became the founder of Task Force on Gay Liberation (TFGL) — a name that was later changed to the Gay and Lesbian Task Force Round Table (GLBTRT). His group then instituted the Social Responsibilities Round Table. Ultimately, these movements were formed within the ALA itself.

In 2007, the Rainbow Project Task Force began within the ALA to promote the introduction of LGBTQ literature for children and young-adults into library collections. The group now maintains an annotated bibliography of LGBTQ titles for youth and teens, as well the yearly “Rainbow List,” featuring the best of LGBTQ young-adult and children’s titles.

In 2010, the GLBTRT announced a new committee: the Over the Rainbow Committee. This committee annually compiles a bibliography of books that show the GLBT community in a favorable light. The bibliographies provide guidance to libraries in the selection of positive GLBT materials. The bibliographies are split by age with the “Rainbow Book List” providing material for children and teens, and the “Over the Rainbow Book List” supplying titles for adults.

According to their website, the Social Responsibilities Round Table (SRRT) has worked to make the ALA more “democratic.” Their primary focus is activism to ensure that libraries and librarians work to recognize and solve social problems in their community. 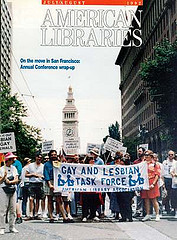 In 1992, American Libraries magazine published a photo of the GLBTRT (then known as the Gay and Lesbian Task Force) on the cover of its July/August issue, drawing both criticism and praise from the library world. Some commenters called the cover “in poor taste” and accused American Libraries of “glorifying homosexuality,” while others were supportive of the move.

The round table also serves library professionals who are LGBT. One of the core values of the ALA is to to “provide a full spectrum of resources and services to the communities [they] serve.” Accordingly, the GLBTRT provides an online toolkit for library professionals who want to promote or display LGBT materials. The toolkit also explains how to deal with complaints from the public.

The book “Liberating Minds” described the movers and shakers behind LGBT library infiltration. To give you some context and perspective, this small vocal LGBT minority, according to Gallup, makes up only 4.5% of the U.S. population. Furthermore, we are informed by a regular loyal Winter Watch reader, who identifies as gay, that a good segment in that community sees no good coming out of this activist agenda at this stage.

The stereotype of librarians often being gay is so strong that the ALA felt compelled not to deny it. Rather, it addressed the reality in the article “Gender Stereotypes Male Librarians Face Today.”

The ALA now has more than a 50-year history of imposing social engineering. Of late, it’s moved far far beyond dealing with the stereotype of the gay librarian. Yes, one of their latest attempts to push the envelope toward “inclusiveness” is Drag Queen Story Hour, which simply involves strange queer men in drag reading “Rainbow List” stories to small children.

Many libraries across the country have been hosting or participating in Drag Queen Story Hours. A few have experienced pushback from some members of their community. To support libraries facing challenges we have established this collection of resources. We will continue to add to it and welcome your contributions.

The money bags behind RADAR and Drag Queen Story Hour are the California Arts Council, the San Francisco Public Libraries, the Horizons Foundation, the Zellerbach Foundation and, notably, the Walter and Elise Haas Foundation.

The Haas Foundation is a Bay Area “philanthropic” organization founded by Walter Haas, the son of Jewish-Bavarian immigrants. Walter married Elise Stern, the daughter and niece of the founders of Levi Strauss Jeans. Haas is best known for being the president of Levi Strauss & Co. from 1928-1955.

The Haas Foundation, according to its website, focuses its energy and capital on five areas: the arts, economic security, education, Jewish life, and Internet safety. The site prominently features articles like “How the World Should Be: Jews, Social Justice and GLIDE” by Rabbi Michael Lezak. You tell us, rabbi.

The Zellerbach Family Foundation is the other Bay Area “philanthropic” organization that funds RADAR Productions and the Drag Queen Story Hour project. The Zellerbachs are a wealthy family of Jewish immigrants known for owning a huge paper mill and paper pulp conglomerate, as well as enormous timber and land holdings in the Pacific Northwest. The Zellerbach Corporation profited greatly during WWII, when European paper companies were unable to export products to the United States.

Besides funding and backing LGBT activism and the Race Industry, a large portion of the Zellerbach Family Foundation’s operating budget is devoted to encouraging mass immigration and refugee resettlement into the United States.

Despite the deep-pockets of primary backers, Drag Queen Story Hour is still looking for donations on Facebook and touting its presence in 50 cities worldwide.

NY Times Op-Ed: ‘Can My Children Be Friends With White People?’