The writer Pere Deschamps asserts that the Masonic/Illuminists’ signal for revolution starting from 1789 was the word “constitution.” Such was the trigger for the 1848 Revolution (aka People’s Spring} in France and all over Europe. There were also poor crops and food inflation.

But 1848 initially was primarily a bourgeoisie movement that was interested in liberal reforms that avoided the Terror of the French Revolution. But once again, the radical illuminist-driven revolutionaries did not have the same pacifist intentions and hijacked the movement.

Nesta Webster, in her book “World Revolution, Plot Against Civilization” [page 132], points to the whole subversive aspect of Masonic Illuminism.

The Revolution of 1848 appeared out of the blue as the multitudes were instructed by the secret societies to take to the streets on Feb. 22 and 23 and barricade themselves. The National Guard initially failed to take action, seeing these working people as comrades, contemptuously described by Karl Marx as the “charlatanry of general fraternity.”

The Guards’ good will was not reciprocated, as by-the-eternal Masonic playbook agent provocateurs were in place, resulting in a massacre on Feb. 24. However, the shock and blow-back from this massacre froze the authorities, some of whom were infiltrated Masons, and the mob took over the streets of Paris. Corrupto King Louis Philippe abandoned his station and took flight. 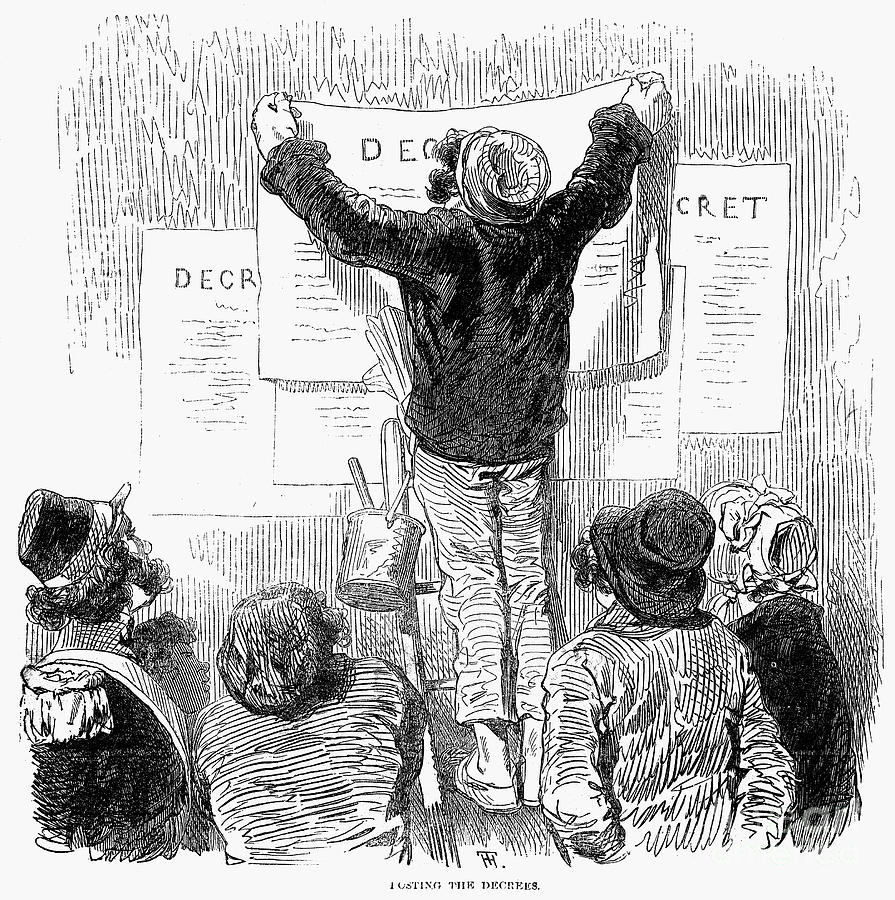 Radical advocates of this social revolution who pushed themselves into power soon learned that revolution looked better as slogans than face to face. The new republic had to deal with immediate and impatient demands on promises made, such as the “right to work.”

However, when things settled down, the workers made sane, reasonable demands: universal suffrage, protection from middle men and reducing the work day to 10 hours. This, in turn, would have opened up more jobs. “Nationalism” made a resurgence in uniting people bound by (some mix of) common languages, culture, religion, shared history and geography.

Louis Blanc (1811-1882), who tried to head the new ad-hoc Republic, had a great opportunity to lay the foundation of a new industrial system. Instead, he indulged in his nasty Illuminist radical fantasy of changing man and plotting against civilization. The sane liberal-nationalist program was swept aside by Illuminist coercion in an unwelcome throwback to the 1790s French Revolution slogans and platitudes.

Read “Illuminist and Freemason Uprising Part I: A Deep Dive into History with Nesta Webster and James Billington”

Blanc implemented a cooperative workshop program under state direction and ownership. The program was bureaucratic and badly managed. Costs were noncompetitive and too high, resulting in widespread program failure. Incredibly the Illuminists had banned workers associations or trade unions dating back to the French Revolution. Blanc and his allies were from the Saint-Simon school of religious (primarily Catholic) socialism, or early liberation theology.

Approaches that center on “justice” and “righteousness” ultimately fail because someone competent needs to maintain and fix the machines, maintain the supply lines and direct the operations. This is a decentralized function performed best on site by recognized superiors, not from a distant apparatchiks’ desk. So, once again, we see the false dialectic or choice in play leading to poor outcomes.

None other than British Prime Minister Benjamin Disraeli, in “Lord George Bentinck: a Political Biography” (1882) [p. 357], offered his insights as to why the moderate liberal reforms were derailed. Ultimately, this derailment ended a setback for the sane measures and a return to the plutocrat-backed tyranny of Napoleon III. We see this false dialectic between radical and reactionary throughout modern history.

“When the secret societies, in February 1848, surprised Europe, they were themselves surprised by the unexpected opportunity, and so little capable were they of seizing the occasion, that had it not been for the Jews, who of late years unfortunately have been connecting themselves with these unhallowed associations, imbecile as were the governments, the uncalled for outbreak would not have ravaged Europe.”

Post Revolution workers started associations, and in 1864 Napoleon III agreed to a progressive and fair labor law including permitting worker’s trade associations. In the same year at the meeting of the Internationale the Masonic Illuminist secret societies infiltrated, took over key positions, and up to their old exploiter tricks countered any progress workers were making. Edouard Drumond writes in La Fin d’un Monde;

After the political failure of their false dialectic second revolution in 1848, the Illuminists turned to other plots to take down more traditional civilization. For that, they honed in on a form of occultism that did not reject “scientific progress or modernity.” L‘occultisme didn’t exist in language until just after the ’48 Revolution. It’s for all practical purposes just a rebranding of Illuminism with the same goal of regressing humanity.

Naturally, they set about to define modernity but primarily as an elitist, plotting, secret society with esoteric language and symbols that excluded the masses. Once again, a false dialectic between science and religion was set up. Wouldn’t you know it, but the solution to this problem-reaction-solution scam was magic, something the Masonic forces just licked their lizard lips over.

German historian Julian Strube argued that the occultist wish for a “synthesis” of religion, science and philosophy directly resulted from the context of contemporary socialism and progressive Catholicism. The emergence of occultism should thus be seen within the context of radical social reform, which was often concerned with establishing new forms of “scientific religion” while at the same time propagating the revival of an ancient tradition of “true religion.”

The occultists (aka Illuminists) now began to openly distance themselves from Christianity, in some cases (like that of Crowley) even adopting explicitly anti-Christian stances and regressed pre-Christian belief systems.

A manifestation in recent months of this regressed personality in current vernacular is NPC Wojak, a meme character with a gray face, pointy nose and blank, emotionless, soulless facial expression. This stems from computer-automated characters within a video game. This instead is an innuendo toward actual heavily programmed people who cannot think for themselves.

I really feel my term “authoritarian follower” or “pajama people” is better. It’s also more humble, as we have all been pajama people to one degree of another. Of course, little ol’ me is not going to set the standard for memes or language. That seems assigned elsewhere.

NPC is at first blush is a useful term. However, it is being applied as a false dialectic, similar to how 1848 was set up in a like manner. The NPC, in reality, is nothing more than an Illuminist-occult influenced radical Bolshevik (the subject of the last three posts), which is an entirely different animal than a liberal.

2 Comments on Illuminism and Freemason Uprising Part III: The European Revolutions of 1848